Midseason 2009: Is Florida Mortal After All?

Share All sharing options for: Midseason 2009: Is Florida Mortal After All?

I don't think it's going too far to say that the perception has taken hold in some corners that Florida has somehow been a disappointment this season. But when you look at the numbers this season, it's an idea that is almost wholly unsupported by the evidence: The Gators are first in the SEC in rushing offense, first in pass efficiency offense, first in total offense and second in almost all the major defensive categories except pass yardage defense -- where they come in first. Oh, and they're a perfect 6-0, as any Florida fan will gladly remind you.

So where do we get the idea that this is somehow not the team we expected to be at the beginning of the season? Is it simply because they are defeating the competition instead of 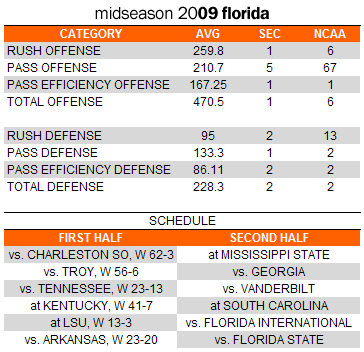 annihilating them? Maybe that statement isn't even fair, though, as Florida waxed Charleston Southern, Troy and Kentucky by the expected margins, a combined 159-16 shellacking in which the only bad news were some troubles holding onto the football agianst Troy and Tim Tebow's infamous concussion against Kentucky.

You can trace part of the "Is Florida really that good" meme back to the Tennessee game. We all remember that Lane Kiffin's comments meant that the Gators would score at least 50 and win by at least 40. Kiffin would leave the game crying like a little girl. Tim Tebow would do the chomp up and down. And then the game finally came around on the calendar and ...

Florida won 23-13. And we all wondered what had happened.

The narrow win against LSU -- well, narrow on the score sheet but not to anyone watching the game -- only fed into this perception of Florida as mortal. And the last-minute win against Arkansas, help from the referees or not, once again seemed to remind us that these Gators would not breeze through the season quite as easily as we thought in August.

The question is whether Florida's toughest stretch is behind it or ahead of it. Are Tennessee, LSU and Arkansas more challenging opponents than Florida State, Georgia and South Carolina? It's difficult to see how Florida can lose the SEC East at this point -- they would almost have to try to do that and still might come up short -- but this team has bigger goals. Anything less than an undefeated national title season will be counted by some, including some of the team's own members, as a failure.

But until the Gators actually lose, you have to give them the benefit of the doubt. After all, none of the teams coming up on the schedule look impressive enough to defeat Florida without some lucky breaks. Florida's biggest opponent is still itself, though that opponent seems closer to a win than before.