Midseason 2009: Do We Have to Say Nice Things About Lane Kiffin Yet?

Share All sharing options for: Midseason 2009: Do We Have to Say Nice Things About Lane Kiffin Yet?

Maybe we were all wrong. That's a little harsh, perhaps; there were a good number of Tennessee fans and even the stray fan of another team who thought that Lane Kiffin would not be an unmitigated disaster in his first season of SEC football. But they were mostly outnumbered by the overwhelming majority of SEC fans, and a few of the Volunteer faithful, who presumed that Boy Wonder was all hat and no cattle.

While we shouldn't get too carried away with the first half of Kiffin the Younger's first season in Knoxville, the results aren't exactly discouraging. The Vols are far from lighting up the conference; even their average offensive numbers 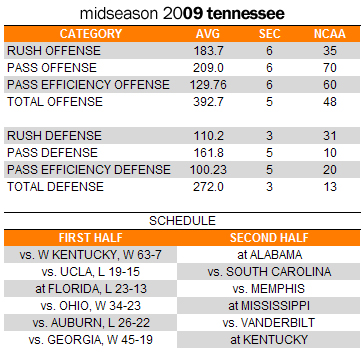 are bolstered by a couple of easy nonconference wins. But the defense appears to be as good as its ranks would suggest, and as long as Monte Kiffin stays around it won't take a Herculean effort on the other side of the ball to win games.

Admit it -- most of us thought after the UCLA loss that 3-3 was going to be a stretch for the first half of the season. Even two weeks ago, the idea seemed dubious. Then came the shellacking of Georgia and there seemed to be plenty of people radically revising their outlook for Tennessee. A bowl game? Certainly. New Year's? Maybe.

But don't get too carried away. There are still three losable games in the second half of the season (Alabama, South Carolina, Ole Miss) and even a game at Kentucky that could prove to be trouble if Tennessee's newfound offensive progress proves to be nothing more than a couple of good weeks. Memphis and Vanderbilt are really the only surefire wins over the next six weeks, though if you presume that the Vols will win at least one or two of the toss-up games -- which pretty much includes everyone except Alabama -- they should make a bowl game again.

That's progress, and probably enough to justify calling off the dogs for at least a year, if we assume that Kiffin will keep his mouth shut. After all, he seems to have curbed the most outrageous comments and actually played nice for a while.

You have to assume that the nice guy act might fade away if he starts to win, at which point he would likely become insufferable for non-Tennessee fans. It's not a lock that we'll ever get the opportunity to find out.

But based on the first half of the year, we might want to prepare ourselves. Just in case.