Midseason 2009: Is the Real LSU the W-L Record or the Stats?

Share All sharing options for: Midseason 2009: Is the Real LSU the W-L Record or the Stats?

Can someone please tell me how LSU is 5-1 at this point? (Georgia fans might snark that we should ask the referees of their game against the Dawgs.) The only even moderately encouraging number on offense is passing efficiency and the only categories in which they're in the top half of the SEC on defense is rushing and pass efficiency.

Part of it, of course, is the schedule. The opening four games were not exactly murderous and it's not clear how significantly that controversial victory in Athens was. It didn't take a ton of offense, in terms of yardage, to defeat any 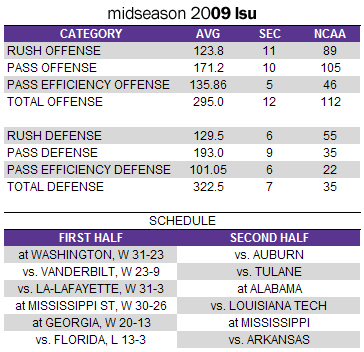 of the five teams against which LSU emerged victorious, and from an offensive standpoint the loss to Florida was a disaster.

Still -- 295 yards? Last in the league and 112th out of 120 teams in the FBS? This was the team that couldn't help but get better with Jordan Jefferson taking over for the besieged Jarrett Lee, whose prodigious pick-six numbers from last year were supposed to be holding back the Bayou Bengals.

But look at the last half of the season. LSU gets spiraling Auburn at home and still has games with Tulane and Louisiana Tech. That could get them to eight wins. Arkansas and Ole Miss could make it nine or ten. A win at Alabama looks like a bit of a stretch, but also shouldn't be strictly ruled out.

All that, though, comes from a perception of this team that might not be in sync with reality. After all, does anyone thing LSU can defeat Auburn with just 295 yards of offense and an average defense? Even Ole Miss might be able to capitalize on anything other than a good outing, and wait until Arkansas gets a chance to line up against that pass defense.

It's a mystery, really, when you consider the talent that Nick Saban and then Les Miles have stockpiled in Baton Rouge. It could be that Miles isn't quite the coach that some of us thought he was after the 2007 run to a BCS national title, and that last year's 8-5 record is a better indicator of what he can do at LSU over the long term.

I can't help think that, if that's the case, things won't end well.