Midseason 2009: Ole Miss Still Has Plenty to Play For

Share All sharing options for: Midseason 2009: Ole Miss Still Has Plenty to Play For

It didn't begin very well -- the 45-14 win against Memphis was far less impressive than the score -- but I think most people who believed in Ole Miss were still willing to give the Rebels the benefit of the doubt. Even some of the skeptics appeared to be reluctantly siding with Ole Miss as they approached the game with South Carolina, a matchup that began with the Rebels at No. 4.

Why they moved up that high by waxing Southeastern Louisiana and defeating Memphis is a testament to the influence of preseason expectations. And when the Rebels finally played a decent team on tha Thursday night in 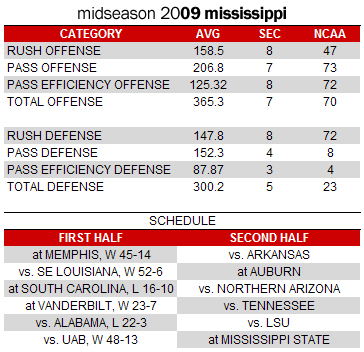 Columbia, the wheels came off. QB Jevan Snead looked like he was back to his early 2008 form and the Gamecock shut down the rest of the Ole Miss offense pretty convincingly for a 16-10 victory. A win against Vanderbilt taught us little and a loss to Alabama put the Rebels so far behind in the SEC West race that dreams of Atlanta are pretty much gone.

To get there, Ole Miss must sweep its remaining conference schedule (Arkansas, Auburn, Tennessee, LSU and Mississippi State) and see Alabama lose three SEC games out of its last four (Tennessee, LSU, Mississippi State and Auburn). This is not exactly likely. In fact, the moment Ole Miss loses or Alabama wins any combination of two games, the Rebels are mathematically eliminated.

So it's fair to say Mississippi needs to adjust its goals for the season. Ole Miss should be favored in all but two of its final games, and both of those (Auburn, LSU) should be toss-ups or close edges for the other team. A 10-win season would likely be a nice enough consolation prize for missing Atlanta, though a nine-win campaign would probably leave a bad taste in most fans' mouths.

Key to achieving even those more modest objectives, though, is a turnaround for the once-touted offense. Snead and Co. are in the bottom half of the SEC in basically all the major statistical categories, leaving the average to above-average defense with nothing to lean back on. Consider that the defense is only allowing 19.0 points per game in the Rebels' two losses; that shouldn't be a problem for what was supposed to be one of the stronger offenses in the league.

It's not beyond Ole Miss to do that; in fact, that was the script for the late-2008 run that made the Rebels the media darlings over the summer. They might not be able to win the SEC West this year, but second place isn't bad.