Share All sharing options for: Midseason 2009: Which Way Kentucky?

If there's a team that's the most difficult to figure out here, it would have to be the Kentucky Wildcats. After all, they've lost to the three best teams they've played (Alabama, Florida and South Carolina), defeated the two worst (Miami (OH), Louisville) and won the game in between (Auburn). But almost all their stats saving rushing margin are pedestrian at best and awful at worst by SEC standards, and only pass defense would even be good nationally.

Oh, and starting quarterback Mike Hartline is gone for at least a time, so don't expect their passing offense numbers to go up in any appreciable way. This is a team that is going to have to continue winning with its ground game and 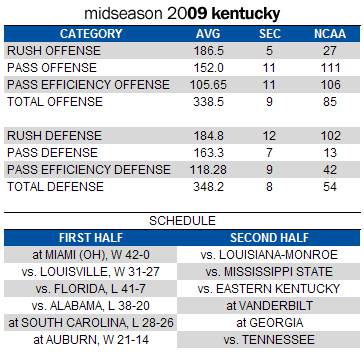 some defense and maybe just a little bit of luck. Maybe they can contact Sylvester Croom and Bobby Johnson for some pointers.

The 'Cats do have one thing in their favor: the schedule presents them with at least five and maybe six winnable games, including four in which Kentucky should be favored. With three wins already in the bank, just taking 75 percent of those games that they should win would put the Cats in the postseason conversation.

As far as seven or eight games -- they'll have to improve on the defense first. The Wildcats' league-last rushing defense is at least in part caused by having faced both Florida and Alabama in the first six games, so perhaps we shouldn't read too much into that. But it's not like Kentucky is shutting down the pass with any great effect. With a team that has lost two fairly lopsided contests, the passing yardage defense numbers aren't quite as important as the passing efficiency defense. Taking that into account, the defense numbers look even more suspect than you might initially think.

Was the Auburn game a watershed moment for Rich Brooks' attempt to take Kentucky to a fourth straight bowl? It was critical to the effort if nothing else; Kentucky would have gone into the second half of the season with almost no margin for error had they not defeated the Tigers. Whether or not it changed the tenor of Kentucky's season will decide where and when they play that bowl game.