Midseason 2009: Arkansas Confounds Expectations. Every Last One of Them

Share All sharing options for: Midseason 2009: Arkansas Confounds Expectations. Every Last One of Them

Maybe it's Arkansas and not Houston Nutt that causes the wild swings in expectation inside of a single season. After all, Arkansas was supposed to be this year's Ole Miss, the team that would be better than the previous year and might ruin someone's season before maybe playing in a premium bowl game.

Then the season began. After the expected easy victory against Missouri State, the Razorbacks lost a shootout against schizophrenic Georgia before getting waxed by Alabama in a 35-7 rout that wasn't as close as the score 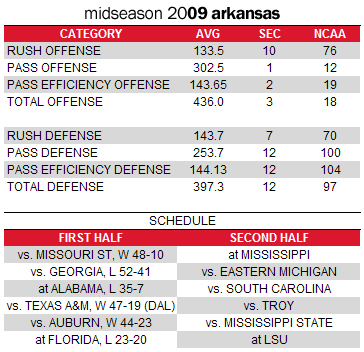 indicated. Suddenly, the dreams of bowling anywhere outside of western Tennessee or Mississippi seemed like a mirage.

Then came a game with the team that suddenly looked like the actual surprise team of the year: Auburn. The Arkansas defense showed up for the first time this year and Ryan Mallett and Co. took advantage of the Tigers' suspect pass defense to ring up 44 points and win the game by three touchdowns.

We all know what happened this past weekend at Florida, when the Referees Gators defeated Arkansas on the strength of yellow flags a great fourth-down comeback engineered by Mike Slive's black helicopters Tim Tebow.

So where does Arkansas go from here? There are really no unwinnable games left on the schedule; even though the Razorbacks go to Baton Rouge, they've given LSU more trouble than almost any other team over the last two years. Arkansas was one of the two teams to defeat LSU during its 2007 BCS Championship season and provided a disappointing coda to a less-than-expected season last year.

This weekend's game against Ole Miss will be a significant sign of just how good or bad this team might be in the second half, while Eastern Michigan and Troy should be sure wins. South Carolina and Mississippi State will be more challenging, considering that the Western Division Bulldogs might have the firepower this year to capitalize on Arkansas' defense and the Gamecocks might have a strong enough defense to shut down the Petrinoffense.

Ah, defense. That's the only thing holding the Razorbacks, um, back. Allowing almost 400 yards per game isn't going to give you a lot of victories in the SEC, particularly when you're taking on the schedule that Arkansas has. As we said before, there are no unwinnable games in the second half, but there are also four losable matchups. With three wins at this point, Arkansas will have to avoid a sweep to remain bowl-eligible.

That should happen; at least seven wins seems like a fair enough forecast for this team. Which probably puts them right where most of us would have expected at the beginning of the year.

Maybe it was Houston Nutt after all.