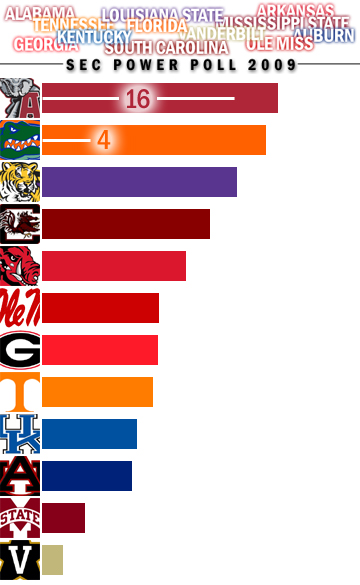 Alabama claims the No. 1 spot by a wide enough margin to proclaim the tie with Florida broken. As for the middle of the SEC, here's an idea of how murky it is: The difference between No. 6 Ole Miss and No. 10 Auburn is just as large as the gaps between No. 3 LSU and No. 4 South Carolina or between No. 5 Arkansas and No. 6 Ole Miss. And Vanderbilt manages to get one 11th-place vote, with the other last-place ballot going to Auburn.

The biggest move belongs to Auburn, which falls from No. 5 to No. 10 after losing to Kentucky. Georgia advances two places by obliterating the Commodores and Ole Miss does the same by waxing UAB. Other changes: Arkansas +1, Tennessee -1 and Kentucky +1.

The Tide finally found a quarterback, Mark Ingram.  Put him in the Wildcat and let him run or hand off to Trent Richardson because the only thing that could stop the Bama offense was the forward pass.--Orange and Blue Hue

An efficient killer ready to crush all who dare stand in the way. And that's just Mark Ingram.--Alligator Army

The SEC's clearcut No. 1 team. Who happened to take 55 minutes to score an offensive touchdown at home. Not a vintage year for the league, I'm thinking.--War Blog Eagle

For the first time in 16 games the Gators won a game by less than double digits. Obviously it's time to start shovelling dirt on their grave.--Orange and Blue Hue

As the Gator D bails out Meyer's sputtering Wundermachine yet again, it's time (again) to hail Charlie Strong as the best assistant coach in this conference.--War Blog Eagle

Blah blah blah, bad call. Quit whining about it. Florida is not an unstoppable juggernaut, but they are still real good.--And The Valley Shook

Is it a sign of LSU's lingering irrelevance to the national-title race that I had to go back and check just now to see whether they actually played last weekend?--Hey Jenny Slater

Tigers en route to one of those 2006 Auburn-style "We're not all that good, but somehow we ended up winning 11 games anyway" kind of seasons.--War Blog Eagle

The Gamecock offense actually won the game for the Tide with Garcia's pick six.  The rest of the game's offensive ineptitude on both sides simply turned out to be window dressing.--Orange and Blue Hue

Never really out of it against Alabama, but they were never really in it, either.--Hey Jenny Slater

If this team could actually score touchdowns in the red zone, they'd be in the national championship hunt right now. For reals.--War Blog Eagle

Egad. They HAVE figured out how to play defense. Unfortunately, they haven't figured out the fine art of paying off refs.--Hey Jenny Slater

The only game Arky was out of was the 35-7 loss to Alabama. If Ryan Mallett was more accurate, we would be talking about a 3-1 SEC record, not 1-3.--Alligator Army

It's not like the Hogs didn't know Alex Tejada was shakier than a bobblehead at the San Andreas. If you don't replace him or get him closer than 35 yards, that's what you get.--War Blog Eagle

The Arkansas game last year was where Ole Miss turned it on for the rest of the year and so far their 2009 performance has been about the same as 2008. Can Ole Miss kick it into high gear again?--The ACC & SEC Blog

Despite his best efforts, Snead was unable to throw any interceptions this week. Perhaps C-USA DBs just don't have the hands to hold on to his picks.--Save the Shield

The Ole Miss-Arkansas will set the tone for the rest of the season for both teams. Plus, don't both schools have some sort of shared history at this point? I forget.--Arkansas Expats

Finally a solid and dominating performance against a quality ... errrr ... solid ... errr ... well against a football team.  One with helmets and pads and everything else a real team would have.--Orange and Blue Hue

A win at Vandy does little to quiet the doubters of the Dawgs but next weekend's game against Florida is a chance for UGA to erase all the bad energy.--Over the Pylon

There are three teams in the SEC that have allowed more points than they have scored. Georgia is one of them. Not good times in Athens. Jacksonville should be fun for them.--Alligator Army

This past weekend, Monte Kiffin's defense not only pitched a shutout, it didn't give up so much as a single yard of total offense! Lane Kiffin is more awesome than all five Backstreet Boys combined. He's like Kung Fu Panda trapped in Daniel Tosh's body. (Kudos to ausdawg85 for noting the resemblance.)--Dawg Sports

The Vols had a week off to get ready for Alabama.  But something tells me Nick Saban's defense is not going to make Jonathan Crompton look as good as UGA's did.--The ACC & SEC Blog

This is the hardest team to figure out right now. They can muster some more wins but also could lose the rest too.--Leftover Hot Dog

No Hartline? No problem. At 3-3 now, the Cats are looking very likely to make their 4th straight Bowl under Rich Brooks much to the surprise of UK fans and really the entire SEC.--Over the Pylon

These guys lose starters and play better. At the rate the 'Cats are going, it could be a helluva November.--Get the Picture

With Todd coming back to earth, it feels like the wheels are starting to come off the wagon.--Get the Picture

What a way to go down.  Losing to Kentucky.  I imagine that they'll start making offers to Petrino again this week.--Gate 21

The genius shine has come off of Malzahn a bit, and Chizik never had it.--And The Valley Shook

In 6 of 7 games this season, the Bulldogs have scored 24 or more points. Dan Mullen should get Coach of The Year votes just for that.--Alligator Army

Congrats to Anthony Dixon who is probably the most forgotten elite player in the league thanks to MSU's struggles over the last few years.--Save the Shield

Handled MTSU at their place, but now must face a Gator team trying to prove something.--A Sea of Blue

The 'Dores only scored 10 against a defense that Jonathan Crompton lit up. Does payback await in Columbia this week?--Garnet And Black Attack

I am not sure if I see a conference win for Vandy this year.  Just not getting the same breaks they did last year.--The ACC & SEC Blog

That's what I like about Vandy: They are consistent.--Gate 21