Midseason 2009: South Carolina vs. Its History

Share All sharing options for: Midseason 2009: South Carolina vs. Its History

If you wonder why South Carolina fans seem nervous despite their team's 5-1 record and a remaining schedule that would seem to put them on track for a New Year's Day Bowl, the answer is quite simple: 2007.

That year, South Carolina climbed to a 6-1 record and were ranked No. 6 in the country with a chance to move to 7-1 and possibly into the Top 5 with a home victory 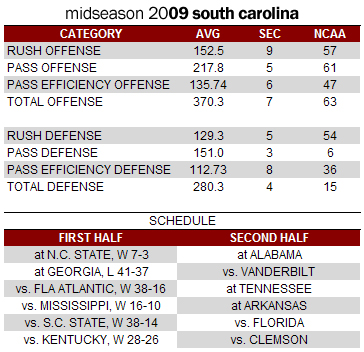 against Vanderbilt. from there, an inconsistent Tennessee and suspect Arkansas were all that stood between the Gamecocks and a 9-1 start with a chance to clinch the SEC East with a victory against Florida in Columbia. What, you don't remember the SEC East Championship South Carolina Gamecocks?

That's because they lost that game to Vanderbilt, 17-6, and proceeded to lose the next four as well, sometimes in excruciating fashion. What started as the most promising year of the Steve Spurrier Era instead became its most agonizing, with a chance for the program's first BCS bowl collapsing after a slide that was historic for even South Carolina's star-crossed program.

There are other parallels as well. The win that vaulted the Gamecocks into the Top 10 that year was against a Top 10 team (Kentucky) that was obviously overrated -- just like this year's victory against Ole Miss. And the schedule was as hideously overrated as even South Carolina's notorious second half has ever been -- much like this year's slate, which features the consensus Top 2 teams in the nation.

But there are signs of hope as well. Vanderbilt should be as winnable as at any time over the last two seasons, both victories for the Commodores. Tennessee is of questionable strength, depending on what you take away from the Vols 45-19 win against Georgia. And both Arkansas and Clemson are winnable if dangerous games. No one sees this team winning 10 games, but eight is imminently possible and nine isn't unreasonable.

Except for that Gamecock luck. Granted, Ellis Johnson is no Tyrone Nix, the defensive coordinator whose squad was one of the main reasons for the 2007 losing streak. There are a few signs of trouble, but the defense appears to be off on the right foot this year.

We'll find out soon enough. Well, soon enough for everyone except Gamecock fans who hope they're not watching another rerun of their least favorite movie.