Midseason 2009: Can Auburn Finish the Season?

Share All sharing options for: Midseason 2009: Can Auburn Finish the Season?

By the time we reached midseason last year, Tony Franklin had already gotten the ax and a season that had started with Auburn as the favorite in the SEC West ended with a 5-7 record and Tommy Tuberville joining his former offensive coordinator in the unemployment line. This year started with Auburn expected to have something around a .500 record and many fans at rival schools ready to have more than a few laughs at the expense of supposedly overwhelmed Gene Chizik.

So much for all that. Auburn is one of the best teams in the SEC when it comes to offense and enters the second half of the season with a 5-1 record that puts them in a position where they could plausibly make a run at the 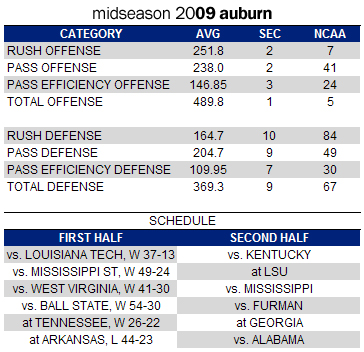 This is actually somewhat puzzling; if there was one thing where Gene Chizik's skill was almost unquestioned, it was as a defensive coordinator. And while that job is technically held by Ted Roof at Auburn, you would expect someone who was as successful as Chizik was at Auburn and Texas to be able to produce a quality defense.

Instead, the Tigers are allowing almost 165 yards a game rushing and almost 205 yards through the air -- and winning anyways, thanks ot the offensive genius of Gus Malzahn. And even that broke down against Arkansas in the final game of the first half.

What next? Assuming for a moment that the Arkansas loss is a blip for the Malzhanfense and not a blueprint that other teams can use to the same effect, the Tigers should be able to score enough points to defeat Kentucky, Ole Miss, Furman and probably even Georgia. Depending on what happens between now and then, Auburn could even be favored when it visits LSU next weekend. But the game at the end of the year, the Iron Bowl, will still define the season -- more this year than ever before. If Auburn can come into that game at 10-1, the Tigers could have the chance ot end the dreams of the hated Crimson Tide. Not that they would be interested in that kind of spiteful revenge. Not at all.

But the defense could still be the Achilles' heel for this team. There's no guarantee that Auburn won't find itself in shootouts with even subpar offenses and lose one of the games in the process. If they can contain the damage, then the Tigers could still have a far better season than the faithful were expecting before the Louisiana Tech kickoff.

How much fun, though, is half a good season?