Well, bet you didn't see that one coming, did you? Alabama ranked fourth in the conference passing efficiency, passing offense the same, total offense the same. (In fact, Alabama is ranked at the same spot in all four of what I consider to be the major offensive statistics, a testament to the machine-like precision of the Coachbot and The Process.)

Alabama goes from good to great, though, when you look per usual at the defensive stastics. Alabama ranks no worse than fourth in the SEC (there's that number again) in each of the four defensive statistics I find to be the major 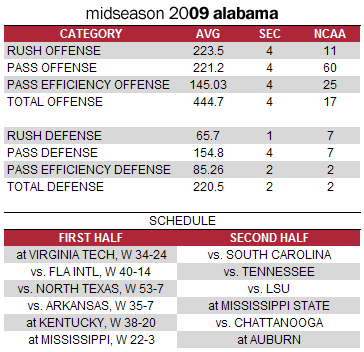 ones, including rushing defense, where the Tide is the best defense in the conference. Not only that, but the ranks are all in the top 10 nationally.

In fairness, Alabama has consumed its share of puffy pastries on the way to those numbers, including waxings of Florida International and North Texas, which the Tide defeated by a combined score of 93-21 earlier this year.

But the Tide has also faced Virginia Tech, demolished Arkansas and ended the SEC Championship hopes of Ole Miss. The "unimpressive" win at Kentucky, at least in the words of Florida boosters, was much better than last year's defeat of the Wildcats and was never really in doubt.

And the second half of the schedule, while more challenging week to week, hardly looks more formidable overall. The two most likely "trap game" candidates, South Carolina and Tennessee, both come to Tuscaloosa over the next two weeks. The showdown with fellow SEC West contender LSU, which looks far weaker than advertised after its game against Florida, also is home game. After that it's at Mississippi State, vs. powerhouse Chattanooga and at Auburn for the Iron Bowl to end the season. And what a game that could be if the Tigers can rebound from their loss to Arkansas and run through the rest of its slate undefeated, setting up a winner-take-all de facto SEC West Championship. Please, LSU fans, put away the air-sickness bags -- that's the last time in this post I'll mention that possibility.

The meta view of Alabama's season halfway through, though, is that Nick Saban seems to be doing what he was somewhat unsuccessful at doing during his time in Baton Rouge: Building a consistent SEC title and national title contender. The only knock you can have against Saban's LSU tenure was that he never had consecutive 10-game seasons or consecutive appearances in the SEC Championship Game. He's poised to break that pattern at Alabama in just his third year at the school. While all the national attention is focused on the emerging dynasty in Gainesville, most SEC fans realize that Saban is doing something almost as impressive at Alabama.

Of course, Saban and his team still have to get there. But if they play anything like they have so far, they should once again be 12-0 when the regular season ends, with only a game against that other great SEC game standing between them and the titles that Alabama fan can expect to come to Tuscaloosa fairly regularly in the future.