Midseason 2009: Is the Worst Yet to Come for Georgia?

Share All sharing options for: Midseason 2009: Is the Worst Yet to Come for Georgia?

Faulty predictions are built on faulty assumptions, and so it was that I called for Georgia to have a 9-3, 6-2 SEC record with these words: "I'm giving a lot of credit to Mark Richt because, quite frankly, he's Mark Richt. ... This is, in my mind, an optimistic way of looking at Georgia's season. But Richt has earned that."

Ah, yes. Instead, the Dawgs have already lost three games, two of them in the SEC, and still have matchups at Florida and vs. Auburn in conference and at Georgia Tech on the out-of-conference slate. There are well- 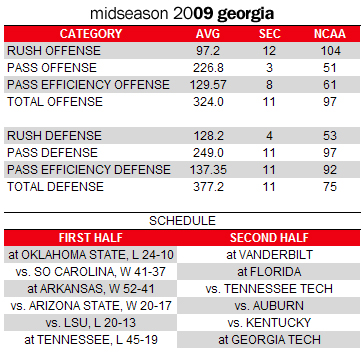 founded calls for the resignation of the defensive coordinator, not as well-founded speculation that Richt himself might be in trouble and questions about how a promising season that was expected to prove that Georgia needed simply to reload after the losses of QB Matthew Stafford and RB Knowshon Moreno might in fact be in a bit of a rebuilding pattern.

Actually, the passing totals aren't that bad for an SEC team, but the rushing offense is abysmal and the passing efficiency numbers lag because of it. When all you can do effectively is throw the ball, you ring up a lot of yards but aren't very efficient doing it. There's a reason Mike Bobo is also among those whose head is being called for by the faithful in Athens.

Yes, Georgia is 97th in total offense in the NCAA, worse than Vanderbilt. And this despite combining for 93 points in games against South Carolina and at Arkansas. But when you can't move the ball and you can't stop other teams from doing anything other than running the ball, then your lack of offensive punch moves from a reason for concern to a three-alarm fire. That is where Georgia's season moved from above-average to in danger of running of the rails. At least by the barometer of the Richt Era.

Consider that Georgia currently sits at 3-3, 2-2 SEC. They face a couple of gimme games at Vanderbilt, assuming there's no hangover from the loss in Knoxville, and vs. Tennessee Tech. They'll be favorites in Kentucky. But Florida is still a likely loss, and even games against Auburn and at Georgia Tech can best be described as toss-ups at this point. If everything goes perfect and they split the 50-50 games, the Dawgs would be 7-5. That would be the worst regular-season mark in Richt's career. Lose both toss-ups or have something go wrong against Vanderbilt or Kentucky -- both teams that have upset Georgia during Richt's tenure -- and the Dawgs fall to 6-6. And if they lose both toss-ups AND have one of the conference upsets ...

Those upsets, by the way, came in 2006. You might have heard something about 2006 from Richt and Co., who are referencing it as a reason why Georgia's season still might turn around. After all, they lost to UK and Vanderbilt and things still got straightened out in the end, right?

Not exactly. The Dawgs started out 5-0 in 2006, and then things fell apart with a 51-33 shellacking at home against Tennessee that started a 3-4 close to the season. We remember the 37-15 victory over national title darkhorse Auburna nd the three-point victory over ranked Georgia Tech in part because they were stunning giving how the season was going in the last half, not because of the struggles in the first. Indeed, if Georgia loses in the second half of this season to the same teams against which it lost in 2006, it will be 6-6 when the season ends.

So Richt might actually have a tougher time this year than even in 2006. That's nothing to fire him over if you're looking it at from a rational standpoint. But, in case you've forgotten, fan is a shortened version of fanatic.