Share All sharing options for: Midseason 2009: Mississippi State Shows It Can Compete

There aren't many SEC teams that would be happy with a victory over an FCS foe, losses to SEC opponents by 4 points and 25 points, a win over Vanderbilt and defeats against an ACC team and a Conference USA contender. Of course, there aren't many teams like Mississippi State.

Coming off the long nightmare that was the end of the Jackie Sherrill Era and pretty much the entirety of the Sylvester Croom Era, Mississippi State fans are looking for signs that Dan Mullen offers an opportunity to be 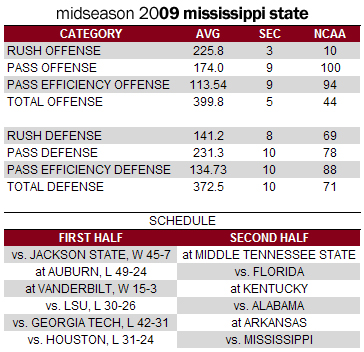 competitive, something that has rarely happened on a sustained basis in Mississippi State history. (Since the end of World War II, State has had more than two non-losing seasons in a row just four times.)

There were certainly some signs in the first half. While Anthony Dixon has been a huge part of State's success on the ground, the third-ranked rushing attack suggests that the Western Division Bulldogs could be able to run the ball even after the senior leaves. The defense is more troubling than it ever was under the Croom regime, though, the first possible crack to emerge in Dan Mullen's so far strong armor.

And, at some point, State has to be able to build its reputation on winning games, not losing narrowly. The four-point loss to LSU was a nice indicator that the program is moving in the right direction; the closest Croom ever came was 10 points, and LSU routinely won the game by 40 or more points. But if State simply replaces losing game after game to LSU by five touchdowns with losing game after game to LSU by a field goal, it's hard to count that as actual progress.

As for the rest of this season, it's not hard to see the Bulldogs winning perhaps four games, with victory over Middle Tennessee State and a win at Kentucky or rivalry upset against Ole Miss. A bowl bid seems out of the question, but honest Mississippi State fans would likely privately tell you they never expected that to begin with. Just getting a reason to believe that there are postseason trips in the future is reason enough to celebrate.