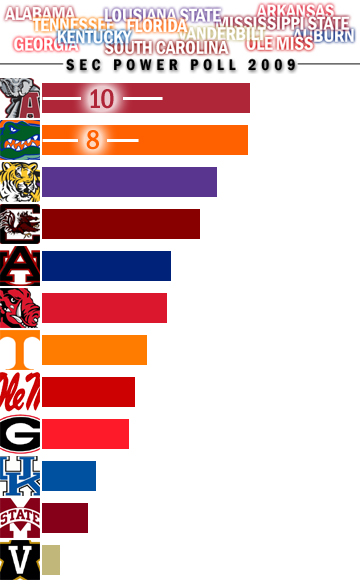 If you listened to Team Speed Kills Now on Tuesday,  you might notice a slight difference in some of the numbers. We had some late votes I decided to count because they didn't change much in the rankings except to break the tie between Alabama and Florida. With only two points separating them and the two teams capturing between them every first- and second-place vote, and with some voters openly saying they're torn between the two, it's essentially a tie regardless of who's actually "No. 1" at the moment. This is a debate we'll likely be having until December.

Other news: LSU remains at third despite losing to Florida, mostly because anyone who could challenge them lost or looked bad winning. Georgia drops to 9th after falling apart in Knoxville. And Vanderbilt sweeps the last place votes and is on pace to easily win the "Worst of the Best Award."

The Tide's win over Ole Miss was thorough, impressive, and never in doubt. Greg McElroy had that bad day we all saw coming, and it didn't matter one bit.--Red Cup Rebellion

Alabama is playing better than anyone in the country right now. Their defense is brutal, their offense effective.  Now, if they could just figure out how to defend a kick return.--Gate 21

Yawn. SEC West opponent ... no third down conversions allowed ... 200 yards rushing against 72 allowed ... +4 turnover margin ... Wake me when we get to Atlanta.--Save the Shield

The Orange and Blue are a solid football team, although ESPN tends to overlook the reason why. I saw a headline at the Worldwide Leader's website describing Tim Tebow's effort against Louisiana State as "superhuman." Uh ... the Gators scored 13 points in Baton Rouge. Was Joe Cox superhuman when he lead the ‘Dawgs to a 13-point outburst against the Bayou Bengals, too? It's the defense, dude.--Dawg Sports

Seriously:  if an offense can survive with only one trick, why worry about anything else.  Do they NEED a deep passing game?  No.--Rocky Top Talk

Hello role reversal: Bama's been the explosive, dominant-in-all-phases team and the Gators have been the clock-killin' defense-driven possession masters. Do they give Heismans to game managers?--War Blog Eagle

The Tigers played a gritty game against Florida, but their offense simply isn't good enough to run with the best defenses. I expect they'll have a good, nine- or ten-win year, though.--Garnet and Black Attack

Narrowly avoided the letdown trap against UK and look like they might finally be fielding the offense Spurrier wanted all along. Will give Alabama a test next week if the Tide aren't paying attention.--Hey Jenny Slater

Spurriers team gutted out another SEC win but their offense is inconsistent and their defense does not possess enough speed to be elite.--Orange and Blue Hue

What has no legs and no arms, but can outrun Steve Spurrier and beat him silly? The impending South Carolina collapse. Catch all the laughs starting this weekend in Tuscaloosa.--Red Cup Rebellion

The party's not over for the Tigers, but the expectations are now more in line with reality.--Track Em Tigers

Well, the party is over for Gene Chizik and Auburn, courtesy of the Razorbacks.  Auburn has a solid core, but needs to learn how to play defense -- that whole tackling thing, is important.--Gate 21

Gus Malzahn must really, really hate the Razorbacks at this point.--Arkansas Expats

We've just seen a picture of how good the Razorbacks could be if they could consistently lock down on defense, and it is not pretty for the rest of the SEC West.--Hey Jenny Slater

Bobby Petrino gets a "huge" win over his future employer.--Red Cup Rebellion

Up until now the Tennessee coaches have treated every loss as if it was some kind of moral victory.  I wonder how they will handle an actual win in the SEC.--Orange and Blue Hue

The only remaining question about Tennessee is when will the shape-shifting alien that replaced Jonathan Crompton have to return to his home planet.--Red Cup Rebellion

The rest of the league had best pray Crompton Comes Alive was a one-week engagement, because that defense and that running game paired with a solid quarterback is -- well, just ask Georgia what it is.--War Blog Eagle

Tied for last place in the Western Division was not where Ole Miss expected to be at this juncture, but Houston Nutt has done a heck of a job of bringing those overly lofty expectations down to a more manageable level.--Dawg Sports

Perhaps the most overrated team in recent SEC memory. The offensive line and quarterback are an utter mess, and Houston Nutt has now cemented his reputation as a coach who can't win with expectations.--Garnet and Black Attack

Who would have believed Jevan Snead would be behind Jonathan Crompton at this point in the season.  Nine picks explains a lot about Ole Miss's situation.--A Sea of Blue

After weeks of being good at some things but never everything at once, the Dawgs finally managed to be good at NOTHING at once. "Mark Richt is on the hot seat" is no longer an indefensible position.--Hey Jenny Slater

If the NCAA tracked a talent/results ratio as an official statistic, the Dawgs would rank 118th in that category, too.--Get the Picture

Was that an actual sign of life from the flatlining Wildcats, or just the Gamecocks looking ahead to Alabama? I guess we'll get a definitive answer this week when UK heads to Auburn.--Hey Jenny Slater

They played South Carolina hard, but they have no hope of making any real noise.--Alligator Army

The Wildcats played a close game at Columbia, but fell short. At 2-3, they have played their toughest games, and look to finish deceptively strong.--Red Cup Rebellion

I knew after that 2007 season in which horseshoes and rabbit's feet rained from the Bulldog sky that State wouldn't catch many breaks for a while, but what MSU's endured so far this year is nuts.--War Blog Eagle

Leads the SEC in moral victories.--And The Valley Shook

I wish the SEC would add an extra school to the conference this week, just so I could rank the ‘Dores thirteenth. They've earned it.--Get the Picture

When you say, ‘This is the worst Vanderbilt team I've seen in years,' you're saying something. But what else can you say after zero offensive TDs at Army?--War Blog Eagle

Cut poor Vandy some slack -- they have to go up each game against jock schools that can hand-pick any recruits they want. By the way, who did they lose to this week?--Save the Shield