Tim Tebow is going to be a game time decision (*or maybe not), but there still is a chance that he will not play. We might get an advance screening of what the post-Tebow era will look like with John Brantley running the show.

Now, it's impossible to say exactly what we'll see since Brantley hasn't played a snap during a close game yet, but I went through his appearances so far this year to see how the coaches used him in the offense. I'm not focusing on production in terms of yards or points, since it all came in garbage time. Rather, here's just a sampling of how things change with him under center.

This year, the offense has centered around running more than it has in the past. Just look at the Florida-Tennessee game: 19 pass attempts versus 44 rushing attempts. It's a run-heavy attack.

Brantley is more of a passer, and that bears out in the play selection. I went through all of his plays and charted out the run/pass mix. This includes plays that were called back for penalties, and if a play was supposed to be a pass but ended up a scramble, it still counts as a pass. Here's how it broke down:

Note: this does not include the final drive against Kentucky, which was just six handoffs to kill the clock.

There still is a preference for run over passing, but it's nowhere near as pronounced. The play calling comes a lot closer to being balanced, and that fact makes Deonte Thompson's return to the lineup this week all the more important. While most folks have focused on Tebow's status (and for good reason), the second most important story for UF this weekend is Thompson's return. The passing offense opens up considerably with him in there, and that's huge if Brantley is indeed the one to start.

Tebow is the standard short yardage back. If he's out, then they've got to do something else, right? While charting play selection, I also kept track of what happened on third or fourth and short (three or fewer yards to go). The choices were as follows:

Of the seven short yardage scenarios, there were four runs and three passes. All of the passes worked, and all but one run worked. Rainey up the middle doesn't generally work on third and short regardless, so seeing a failed attempt there is not surprising. You can also just use Gillislee as a proxy for Emmanuel Moody as they are both big backs, but Moody's day was done against Charleston Southern when Gillislee got his third and short carry.

Seven is not a tremendously large sample size, but with Brantley in the game, third and short is not an automatic quarterback dive. Look for play action roll out passes. 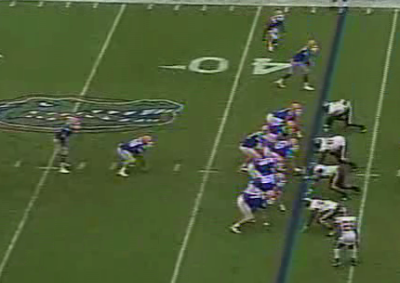 The most obvious difference with the Brantley package is the I-formation. Here it is against Troy with Rainey as the tailback. We heard in the preseason that Tebow was going to run some plays from it, but he's yet to do so. With Brantley in however, it makes regular appearances. Watch out for ball security with it though - Brantley fumbled the center exchange against Kentucky and the Wildcats recovered. Center Maurkice Pouncey isn't used to doing a lot of under center snaps.

While Brantley does have a good arm and he throws a nice ball, they didn't take too many downfield shots against the tomato cans. Most of his work was done in the short and intermediate range with only a couple bombs (most of which were very inaccurate) mixed in. He rolled out on after play action quite a bit, although that just could have been because he was playing behind a line composed entirely of true freshman most of the time. Against Kentucky, he threw what felt like the first fade route since the Zook era, so that's back in the red zone playbook as well.

It's a fair bet that if Brantley gets the start, there will be a lot of run plays called to take some pressure off of the guy getting his first start and put the pressure on the veteran line and backs. However there still will be quite a bit of throwing, more than when Tebow is in at least, because that's what Brantley does best. If Florida's line has any trouble dealing with LSU's front seven, I think we'll see a lot of those play action roll out passes that were prominent in his previous appearances.

On short yardage, there will probably be about as many screens as running back dives. The option game should be interesting to watch as well, since Brantley has done almost no speed option this year and folks seem to be expecting a lot of that. A better bet would be zone read option plays. Even though Brantley isn't a big and tough runner like Tebow and doesn't have wheels like Pat White, he's still plenty mobile.

All of this could be moot if Tebow plays. I'd bet this is what we'll see from the Gator offense if he doesn't though.