A Better Game Than You Think. Unless It's Not -- Mississippi's Chance to Defeat Tech

Share All sharing options for: A Better Game Than You Think. Unless It's Not -- Mississippi's Chance to Defeat Tech

The margins have come down some since ESPN set it's AMERICA'S CHOICE crawl at the bottom of the screen, but the general idea remains the same: College football fans at large think that Ole Miss has no chance to win the Cotton Bowl against the Red Raiders.

And who can blame them, really? The last impression most national fans had of the Rebels was their upset victory at Florida back in September. After all, it was an upset, right? Ole Miss had defeated only Memphis and FCS team Samford, had lost to Wake Forest and Vanderbilt, and was at the beginning of a long, slow rebuilding process under Houston Nutt -- right?

A funny thing happened on the way to futility: After narrow losses to South Carolina and Alabama, the Rebels ran off five straight. They quietly became the third-best team in the SEC. 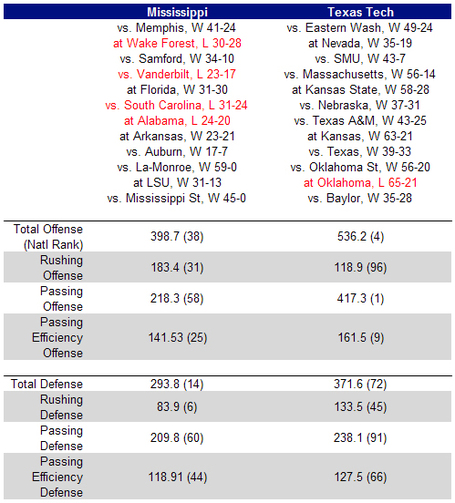 The Red Raiders, meanwhile, were plundering the Big XII like good pirates, defeating Texas, annihilating Oklahoma State and saying a healthy "arrgh" or two along the way. The 65-21 pasting in Norman shocked many by its margin if not its outcome, but the idea of Texas Tech as a TD machine never faded.

There is a chance for Mississippi to win this game, but only one: Get pressure on QB Graham Harrell. At the end of the season, Ole Miss displayed a marauding defensive line -- but it didn't always show up in the opposing signal callers' lines in the box score. Arkansas QB Casey Dick threw for 282 yards, his most productive SEC game of the year; Auburn QB Kodi Burns threw for 319 yards (but three interceptions against zero touchdowns); and LSU QB Jordan Jefferson made almost as much of an impression in the 31-13 loss to the Rebels as Ole Miss did in one of its best games of the year.

Yes, there are ways for the Rebels to put points on the board. QB Jevan Snead and all-purpose threat Dexter McCluster, who rang up 1,100 yards and 6 TDs rushing and receiving this year, have to spark Mississippi's offense. Even a great defensive effort is going to hold Texas Tech to 21-28 points.

But the Rebels need that great defensive effort, and they need everything else to break their way. Playing a hunch, I'll say they do. Mississippi 31, Texas Tech 24