It's Not the National Championship, But It's Something: Georgia Looks for Cap One Crown

Share All sharing options for: It's Not the National Championship, But It's Something: Georgia Looks for Cap One Crown

Georgia was always supposed to play in Florida at the end of the year. Well, some of us chose them to play there. But it was the year-end, national championship bout in South Florida that was a possible destination -- not the New Year-opening, Capital One Bowl in Central Florida.

In fact, some people did think Georgia would miss an undefeated season and chance to play for it all, but only because the SEC is tough and the Dawgs would fall somewhere. Not because of twin annihilations at the hands of Alabama and Florida and a heartbreaking loss to Georgia Tech. 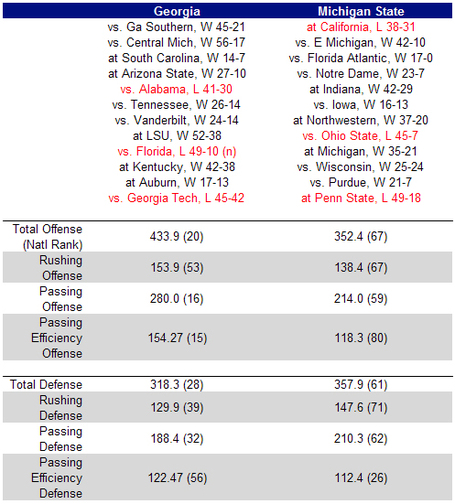 For teams ranked No. 16 and No. 17 (as always, BlogPoll), this is not an even match statistically. Georgia is one spot better in polls and much better in everything except pass efficiency defense. And while Michigan State's 9-3 would be solid against any slate, the Spartans' schedule is not as tough as Georgia's.

On the other hand, both teams seemed to hold to a common theme int heir respective seasons: Defeat teams that are "worse," lose to teams that are "better." Georgia won against the lesser teams of the SEC and claimed a couple of good wins along the way; the same for Michigan State, which had showings against Ohio State and Penn State that were just as noncompetitive as Georgia's games against Alabama and Florida (if not more so).

But stick to the pattern. Michigan State is making progress under South Carolina alum Mark Dantonio, but Georgia is the better team. This is the last chance (probably) for QB Matt Stafford and RB Knowshon Moreno to make a statement before heading to the NFL Draft. RB Javon Ringer (370 carries, 1,590 yards, 21 TDs) won't have a good enough day to save the Spartans. Georgia 31, Michigan State 20