A Big One for the Ol' Ball Coach: Spurrier Looks for Momentum

Share All sharing options for: A Big One for the Ol' Ball Coach: Spurrier Looks for Momentum

Another year, another 7-5 season for the Gamecocks. Whatever sneering directed at him from other fan bases -- some of it deserved -- Steve Spurrier has done what no one else could at South Carolina: Turn the Gamecocks into a team that consistently finishes at or above .500. That might not have been the lofty goals he set when taking over at South Carolina, but records of 7-5. 8-5, 6-6 and 7-5 are not exactly the baseline for the Gamecocks.

Which brings us to the importance of the Outback Bowl for the Gamecocks. In order to continue to sell his program to recruits, the Ol' Ball Coach needs something to give his program a spark, a feeling of forward momentum. And anyone sensing that he and South Carolina are hopelessly outgunned in their match-up with Iowa needs to take another look. 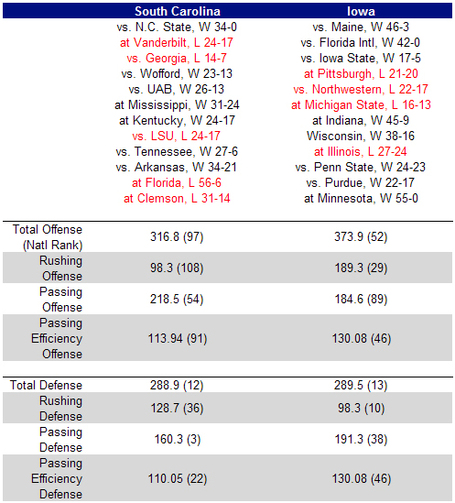 What's first intriguing is that these teams' seasons are almost mirror images of each other. South Carolina struggled early and late; Iowa took on water in the middle of the season. To an extent, this is a function of the schedule. Each team won only one game that could now be classified as an upset: South Carolina's win against Mississippi, which didn't look quite as big at the time, and Iowa's triumph against Penn State. Each team also has a loss in a game they would like to try again: Vanderbilt for South Carolina, Illinois for Iowa.

I've picked against the SEC so far, and they've won both games. This is a kind of reverse homerism; no way will South Carolina be the first SEC team I choose to win. But don't count them out. Iowa 31, South Carolina 30