A few quick notes about some of the coaching searches around the SEC, with some postseason stuff for non-bowl eligible teams starting tomorrow along with bowl preview stuff.

To be clear: Auburn is considering hiring the former quarterbacks coach for Reggie Ball. 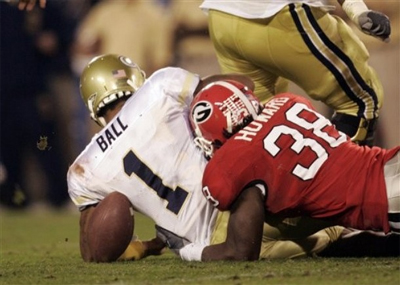 That turned out well.

The Orlando Sentinal reports that Florida State head coach in waiting (and waiting and waiting) Jimbo Fisher is out at Auburn, apparently because he was kidnapped and whisked away to a secure and undisclosed location.

"He has not talked to Auburn and will not talk to Auburn," said Wetherell. He then cackled maniacally, adding: "We've made sure of that."

Also in the mix: South Carolina defensive coordinator Ellis Johnson, who is interested. It's not clear whether the job alone would pull Johnson away from a job in his home state that Johnson openly coveted even before it was first taken by Brian VanGorder, whose almost immediate resignation prompted Steve Spurrier to hire Johnson. (Yeah, that was a weird offseason for the Gamecocks.)

Johnson has done a great job with South Carolina's defense, the main reason the Garnet and Black are 7-5 right now. But his maiden head coaching voyage with the Citadel wasn't promising, and the SEC isn't exactly the Southern Conference.

But we know that no one's been hired yet. Why? Because Brad Locke hasn't been told. And if Locke doesn't know, it hasn't happeend.