It's time to start using FlightAware to track Bobby Lowder's jet. (And while he's looking for a head coach, Auburn's athletics Web site could use a new photo editor.) 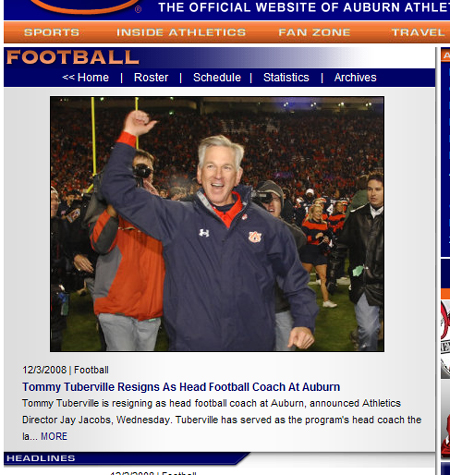 It's all about setting a tone...

Yes, Tommy Tuberville is gone, and while it's not the most stunning news of the season, it's still fairly surprising. After all, Tuberville was 85-40 at Auburn, good for a .680 winning percentage, a "People's Choice" national championship, an SEC title and two division crowns.

But in the ultracompetitive SEC, those accomplishes don't buy you as much time as they once did. They just give fans enough hope that the expectations will crush you in the end.

Then again, Auburn officials might have good reason to be concerned. This season was not a repeat of 2003 for two key reasons, one obvious: In 2003, Tuberville had a winning record (8-5, 5-3 SEC). The other reason is the trend line, which took a decided turn in the wrong direction this year. 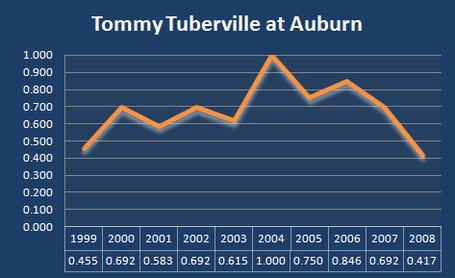 Now, any good statistician will tell you that two is not a trend. But Auburn tends to bounce back from Tuberville's less successful seasons. By that pattern, this year should have been an upturn, or at least (given the program's recent success) a plateau. Instead, the winning percentage continued its march downward.

There's no need, really, to relive the Tony Franklin debacle, or whether the former offensive coordinator's purported "assistants" -- who had been there longer than he had -- actively undermined Franklin in an effort to have him ousted. If so, though, it likely ended up costing Tuberville his job: the Auburn offense went from horrible to abysmal after Franklin left.

A source with knowledge of Auburn’s thinking said the university had already reached out to Texas Tech Coach Mike Leach through the search firm of Bill Carr, who runs many high-profile coaching searches.

The Birmingham News reported that Auburn reached out to Petrino, who has a noncompete clause in his contract that forbids him from going to another school in the SEC West. [EMPHASIS ADDED]

A keen college football mind knows that contracts are no match for the resourcefulness of Bobby Petrino. Actually, unless Petrino has a phenomenal agent, Arkansas might have him locked in for a few years -- or, at least, locked out of Auburn.

Of the other candidates, I'd have to say Leach and Graham probably fit the mold that Auburn fans are looking for: A good (or at least clever) offensive mind. This is just the way things go at most schools. You fire a guy, you go find someone who can fix the problems. In this case, the problem at Auburn is the offense. Or, more accurately, the complete lack of an offense.