The Revolution Was Televised After All: Vanderbilt 16, Boston College 14

Share All sharing options for: The Revolution Was Televised After All: Vanderbilt 16, Boston College 14 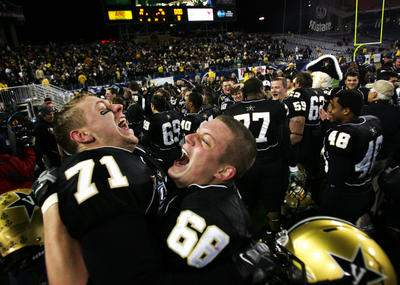 It used to be that other teams didn't win against Vanderbilt as much as the Commodores lost. A costly mistake here, an unlucky break there, and Vanderbilt went from the cusp of a great upset to yet another heartbreaking loss.

So it's fitting that Vanderbilt's breakout season, it's first winning season since 1982, came not so much because the Commodores won but because their opponents lost.

That doesn't take anything away from what Vandy did this year. They ruthlessly capitalized on every mistake their opponents made, from a punt that glanced off a South Carolina player to turnover problems by Ole Miss.

It was the same Wednesday. Down 7-6 in the third quarter? No problem -- a punt bounces off a BC player's leg, Sean Richardson recovers it in the endzone, and Vanderbilt's up 13-7. Flailing on offense while down 14-13 in the fourth quarter? Don't worry -- a pair of personal fouls by Boston College, and the Commodores hit the game-tying winning field goal.

Can Vanderbilt repeat that kind of magic next year? Maybe, though Mississippi State is a cautionary tale about trying to play MacGyver football two years in a row. The Dores will probably be better next year -- but the same could likely be said about Kentucky, Tennessee, possibly Florida and possibly South Carolina.

But nobody saw Vanderbilt even getting to the Music City Bowl this year, much less defeating one of the best teams in the ACC once they arrived.

Who knows? Maybe Bobby Johnson has another trick or two up his sleeve, something that will allow his team to win instead of waiting for the other guys to self-destruct. He better; I doubt the Dores' foes will feel quite so generous in 2009.