Short of Redemption: LSU's Lost Season Comes to an End

Share All sharing options for: Short of Redemption: LSU's Lost Season Comes to an End

There is good news for LSU fans about the Peach Bowl -- and, no, it's not the Chick-fil-A Bowl -- QB Jarrett Lee won't be starting. So there's probably not that much "news" there after Jordan Jefferson started the Arkansas game and played better than Lee. But there's some hope when your teams decides not to start the singal-caller who made an art form of the pick six against a defensive backfield that includes Morgan Burnett, the nation's interceptions leader.

The good news, though, ends there for the besieged Bayou Bengals. 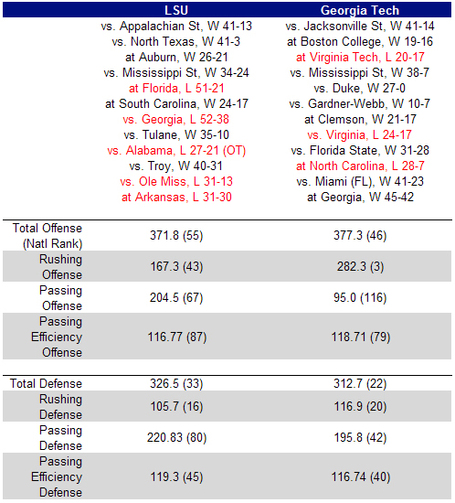 Saying LSU had a disappointing season is an understatement. After losing former starting QB Ryan "Riverboat Gambler" Perrilloux, the Tigers were never able to live up to the hype of being a contender in the SEC West. Their most impressive win was likely the seven-point victory against South Carolina. And the season-ending skid almost looked worse than it already does; LSU very nearly lost to Troy, trailing until a late-game comeback.

Georgia Tech, meanwhile, began their season by defeating a team quarterbacked by -- coincidence here -- Ryan Perrilloux, who found refuge in FCS school Jacksonville State. Most of their early victories, including the three-point win over Gardner-Webb, gave few people any reason to back off predictions that Georgia Tech was in the first stages of building Paul Johnson's triple-option and would be doing good to get to Chan Gailey equilibrium. Then came the final two games of the year, nationally televised demolitions of Miami's and Georgia's defenses and a team that seemed to be "good enough to win the ACC" suddenly seemed to be good -- period.

LSU's rushing defense will be doing all it can to keep up with Jonathan Dwyer and Co. The Bengals' numbers look okay -- until you consider that Florida rushed for 265 yards, Georgia ground out 194 and even run-impaired South Carolina gained 164 on the ground.

Meanwhile, it's hard to see Georgia Tech allowing RB Charles Scott to get much running room. Knowshon Moreno picked up 94 yards in his game against the Jackets, but Scott is no Moreno. And Jefferson might be no Lee -- but that's probably not enough for LSU to win. Georgia Tech 34, LSU 20