There's No Place Like Home: Why Vanderbilt Needs This One

What does Vanderbilt tell us if they get into a bowl game and promptly lose it by 20, ending the season with a record of 6-7? Because that's the prospect that the Commodores face heading into the Music City Bowl against Boston College. 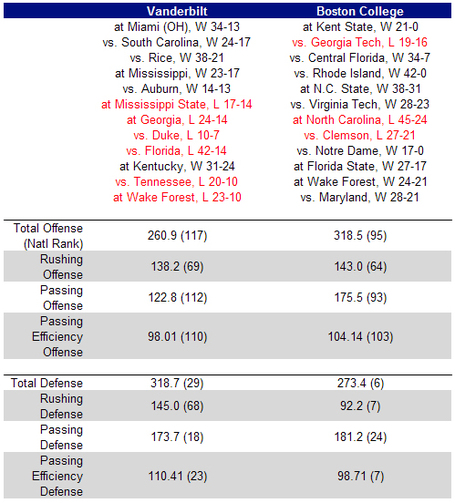 (W-L chart does not include Boston College's 30-12 loss to Virginia Tech in ACC CG.)

Of course, numbers don't tell the whole story, and Vanderbilt can take some solace in its homefield advantage. But it's clear that what Vanderbilt does well, Boston College does exceptionally well. And where Boston College is mediocre, Vanderbilt is awful.

Sure, the teams are about even in rushing yardage, but BC is clearly the better passing team. And while local media is dropping hints about some offensive tricks, there's only so much you can do to compensate for facing a better offense and a better defense. For those of you that like momentum will note Vanderbilt losing six of its last seven games while BC won its last four regular-season contests before its defeat in the ACC Championship Game.

Even with all the Dores have accomplished this year, Vanderbilt needs the validation of beating a high-quality team. If they ever appeared to be more than smoke-and-mirrors to begin with, the South Carolina and Ole Miss wins now seem to be flukes.