The TSK Playoff Sets Its Championship

Share All sharing options for: The TSK Playoff Sets Its Championship

We're still seeking our first upset after the Florida Gators defeat the Texas Longhorns in the second round of the Team Speed Kills playoff to advance to the championship.

Now, top-seeded Oklahoma begins its playoff run with a game against the Crimson Tide, who narrowly defeated Southern Cal to make it this far. A win by Oklahoma will, for better or worse, give us the same matchup produced by the BCS. A win by Alabama will set up a rematch of the SEC CG, but this time for the national trophy. 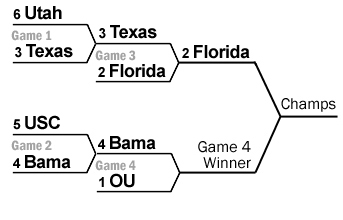