Every year, a lower-tier or mid-tier bowl seems to get a matchup of Top 12 teams that you would normally imagine being played on New Year's Day or in the BCS. The usual suspects are the Holiday Bowl and the Peach Bowl. (And, no, no amount of compensation will ever convince me to call it the Chick-fil-A Bowl.) This year, it's the SDCCUPB, which pairs TCU with Boise State -- the first BCS Buster to defeat a non-Big East BCS-league champion. 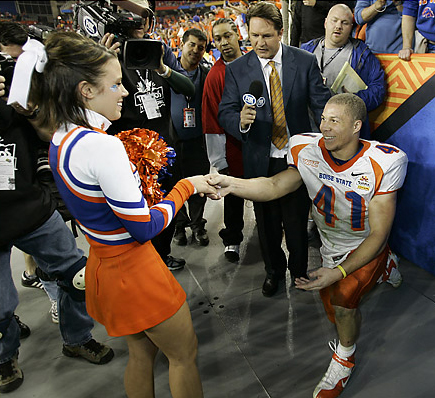 Of course, this better not happen again, or Mrs. Ian Johnson will presumably be upset.

What it is: An attempt to come up with the longest bowl name possible.

How Boise State got here: Most expected the Broncos to have another rebuilding year after last season's team became the first not to win the WAC title since Boise entered the league. So much for that. Led by freshman QB Kellen Moore and senior RB Ian Johnson, the Broncos charged to an undefeated season in the shadow of the Mountain West cage match that produced undefeated Utah. They defeated preseason WAC favorite Fresno State 61-10 in the last regular-season game.

How TCU got here: The Horned Frogs' first loss of the season came in a 35-10 waxing against Oklahoma -- which would be held to 35 points by just one other team all season (Texas). The second loss came against the previously mentioned Utah; the Utes scored with less than a minute left in the game to win 13-10. The key in the run has been TCU's powerful defenses, which has limited opponents to 10.9 points per game.

College football fans care because: It's the best game of the bowl season so far.

SEC fans care because: If Boise wins, prepare for a winter and spring of whining about how it's so terribly unfair that one/both of them didn't get a shot at the supposed national champion, etc., etc. If it's Florida, most of that invective will be directed at the SEC in addition to the BCS.

Watch this game if ... : You believe football is about more than the six conferences you're told are important.