The TSK Playoff Moves to Round 2

Share All sharing options for: The TSK Playoff Moves to Round 2

So we have a few choices, all of them favorable to Alabama. We can go with the higher seeding. We can go with the way The Rivalry, Esq.'s vote turned out. Or I can make the ultimate decision. In the end, they all turn out the same way: the Tide take care of the Men of Troy. Or L.A., really.

By the slimmest of margins (perhaps on a disputed call or last-minute play), Alabama bests Southern Cal. So the Tide moves on to Round 2, where the bracket looks like this: 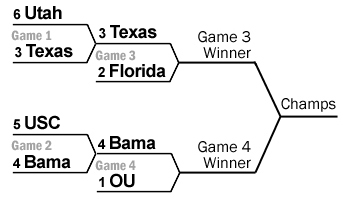 Game 3 is another great one, pitting the Texas Longhorns against the Florida Gators. The third-seeded Burnt Orange, led by Colt McCoy, head to the Swamp to play second-seeded Florida's Tebow-Harvin-Demps-Rainey combination. It's a showdown between the 2005 national champions and the 2006 national champions.

Because it's a second-round game, we'll keep the voting open until Tuesday at noon ET.