Share All sharing options for: The TSK Playoff Continues

(To see the background on the Team Speed Kills Playoff, go here. You can also take part in similar fun over at The Rivalry, Esq. They have an eight-team system.)

Our lone mid-major exits the tournament early, with our voters clearly choosing Texas over Utah. "Clearly" might be an understatement; 88 percent of voters took the Burnt Orange. 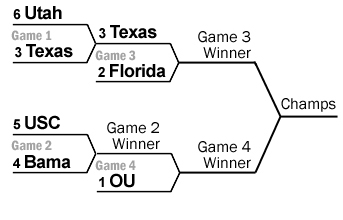 Game 2 features a showdown between (5) Southern Cal and (4) Alabama, played in historic Bryant-Denny Stadium. This should be the better of the two first-round games. The winner moves on to face Oklahoma in the semifinal.