What does it say that Mississippi State hired a more attractive head coaching candidate than Auburn?

Why on earth would any self-respecting football program fire Tommy Tuberville and hire a guy who went an astonishing 5-19 in the atrocious Big XII North, ending his tenure with a 10-game losing streak? Chizik, after all, went 2-4 against non-BCS foes, including a 1-1 record against the FCS. His largest margin of victory against a conference foe was 11, which came last year against woeful Kansas State. His two other victories against BCS opponents -- both last year -- were by two and three points.

The carnage, with margins of victory, the far more frequent margins of defeat and losses by more than two touchdowns in red. 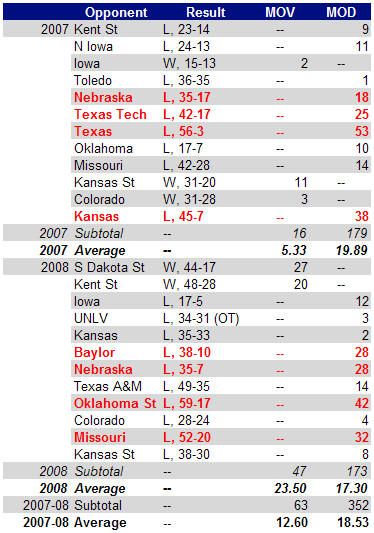 Before you say, "Well, the margins of victory got better and the margins of defeat got worse," take a second look. The victories in 2007 were all against BCS teams; in 2008, they came against South Dakota State and Kent State. And Iowa State this year avoided Texas Tech, Texas and Oklahoma -- any doubt that games against those three would have driven the average margin of defeat even higher? In fact, Oklahoma's unimpressive showing last year was lower than the average MOD -- there's nothing to make us think the Cyclones could have replicated that effort this year. And if Texas defeated Iowa State by 53 last season, how much worse could it have been this year?

Which brings us back, of course, to the question: Why did Auburn hire Chizik? Even fans are perplexed. Track Em Tigers has a stomach-turning visual portrayal of fan reaction, followed by a commenter calling for the team to hand over play-calling responsiblities to Aubie.

Not helping matters: Chizik will earn $2 million a year. Yes, ladies and gentlemen, there are children starving this Christmas season, and Auburn has decided to pay Gene Chizik $2 million based on a 5-19 record in the Big XII North.

The one defense of Chizik, if you'll pardon the pun, is that he had a good career as a defensive coordinator at Auburn and Texas. But his Iowa State defenses ranged from mediocre in 2007 to awful in 2008. This year, the Cyclones ranked 111th nationally in total defense, were tied for 110th in scoring defense, came in 115th in pass defense and ranked 117th in passing efficiency defense. They were 95th in rushing defense, though, so there is that.

All of that ignores the fact that Auburn's defense was not the team's top concern this year -- the offense cost the Tigers game after game after game. (The Cyclones did rank 42nd nationally in total offense, but only 9th in the Big XII.) You would think Auburn might hire someone to fix the offense, instead of leaving that to an offensive coordinator to be named later.

But no, Gene Chizik is the man that Auburn chose to match wits on an annual basis with Nick Saban, Mark Richt, Les Miles and Bobby Petrino -- and, in some years, with Urban Meyer and Steve Spurrier to boot.

And no one seems to know why.