Let's have a playoff

Share All sharing options for: Let's have a playoff

But, and in all seriousness, Brian has never held (to my knowledge) a vote on the mgoplayoff's outcome in a given year and The Rivalry has the eight-team variation I dread. So let's combine the two elements.

For background: I am not really a playoff proponent, but have come to the realization that one is almost inevitable. So after taking into account the valid arguments for and against a playoff, your humble correspondent proposed a six-team playoff broken into three rounds.

Under "A Modest Proposal," the bracket for 2008 would look like this: 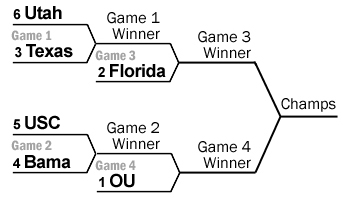 For those of you wondering: Yes, USC is Southern Cal and OU is Oklahoma.

So let's see if it will produce a different outcome than the eight-team bracket. Starting with Game 1: (6) Utah vs. (3) Texas. Leave arguments below. We'll take votes until 11:55 p.m. ET Monday.