So Much for Conference Supremacy: ACC rolls and other Week 14 action

Share All sharing options for: So Much for Conference Supremacy: ACC rolls and other Week 14 action 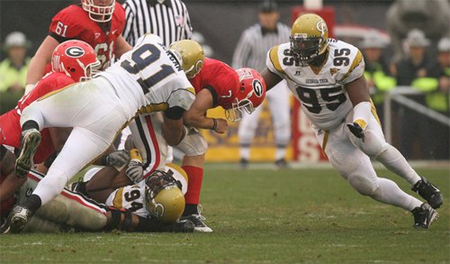 Not exactly what we had in mind.

If the title of this post has a familiar ring to it, that's intentional. Back in mid-October, after Florida blew LSU out of the water in a 51-21 shellacking, the weekly wrap-up was titled "So Much for Western Supremacy."

As damaging as LSU's loss was to the notion that the SEC West was the stronger half of the league, Saturday's triple defeat at the hands of the ACC was an even worse setback for the idea that the SEC is the best conference in the land. Just moments after South Carolina fell 31-14 to Clemson, Georgia ended a 45-42 loss at the hands of Georgia Tech. Wake Forest's 23-10 victory over Vanderbilt hours later clinched a losing record for the SEC against its neighboring BCS league, a conference that national and local pundits alike had mocked for weeks.

Is the ACC better than the SEC? Probably not. Given the up-again, down-again pattern followed by most of ACC's teams, all three of those games could end differently if the games were played again this week. And the weekend was not the kind of head-to-head match-up that would have seen the top-rated ACC team take on the top-rated SEC team and on down the line.

But the games will not be played this week, and no such SEC-ACC tournament is scheduled. The best conference in America does not go 4-6 against the ACC in a season, nor does it go 1-3 in a weekend. You'll have to look for someone else.

Not that everything came out the way the Gators had hoped: Percy Harvin is questionable for the SEC Championship Game. Though, as Nick Saban points out, that's not exactly a reason for Alabama to hold a parade.

"They really have three players. ... No. 1 (Harvin), No. 2 (Jeff Demps) and No. 3 (Chris Rainey). It's easy to remember. They're all outstanding players with big-play ability. They also have outstanding receivers and a Heisman-winning quarterback (Tim Tebow). They utilize all those players in different roles.

"Certainly, we respect Percy Harvin as a great player. But they have some other great players, too."

Alabama, for its part, dismantled Auburn 36-0 on Saturday, gaining 412 yards to Auburn's 170, earning 21 first downs to the Tiger's eight and finishing off Auburn's talk of various thumbs and fingers. The most suprising statistics in the game: Mario Fannin's longest rush was for eight yards, as was Brad Lester's. Ben Tate's long run was for three yards. A 13-yard run by Kodi Burns would be the longest run of the day.

There's not much more to explain from this weekend. For the time, at least, the SEC is a two-team league. Those teams will meet Saturday, in the game everyone has anticipated now for weeks. Everything else is detail.

OTHER WEEKEND RECAPS AT TSK:

Where did that come from? Ole Miss 45, Mississippi State 0