The Greatest Team of Our Era?

Share All sharing options for: The Greatest Team of Our Era?

It wasn't that long ago that Urban Meyer was criticized for calling Tim Tebow "the greatest player of our era." Tebow hadn't won anything without Chris Leak, the critics pointed out -- not the SEC East, not the SEC and certainly not the national title.

All that goes away today, with Florida annihilating Vanderbilt 42-14 as the Great Timbino passes for 171  yards, runs for another 88 and scores 5 TDs. Tebow might not be the greatest player of our era, but Florida just might be the greatest team of the year. Yes, they lost to Ole Miss. But, with the exception of that game, no other team has even come close to challenging the Gators as they bulldozed the rest of their schedule. 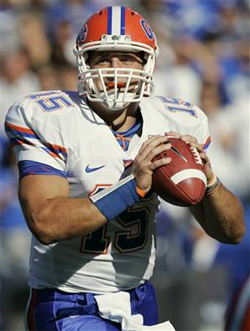 Not the greatest, perhaps, but still pretty good.

No one seriously questions whether Florida will win its last three games -- vs. South Carolina, vs. The Citadel, at Florida State. The only question in everyone's mind is the margin. Can South Carolina's great defense hold the Gators under 30? How long will Tebow play against The Citadel? Can Florida State, a good team that has thrived in the weak ACC, challenge their old rival?

Florida, of all teams, should be cautious. In retrospect, the Mississippi loss is unforgivable. And Florida is only a few wins away from the BCS title game because Penn State lost to Iowa when they weren't "supposed to."

But if they win the rest of their games from here on out -- who thinks they lose to Alabama? They have to be favored to make the national championship game.

First things first, of course. The first thing was beating Vanderbilt and clinching the SEC East. Now, it's just a matter of staying alive.