We will not be the next SEC West Champion

Share All sharing options for: We will not be the next SEC West Champion

"You know, eight years ago I started out not having a lot of success either, but you have to build. And that's what we're trying to do right now, is build on positive energy and a great opportunity so that we can have success in the future."

Translation: You'll take your 7-5 regular season and you'll like it!

Maybe Saban didn't see this coming. Maybe he didn't realize that this was the year that Alabama would win its first SEC West title since 1999 and have a chance at its first SEC championship since then and its first national title in 16 years.

But, then again, no. You have to believe that as good an evaluator of college talent and as good an assessor of football teams as Nick Saban is, he knew something special would happen for this football team. 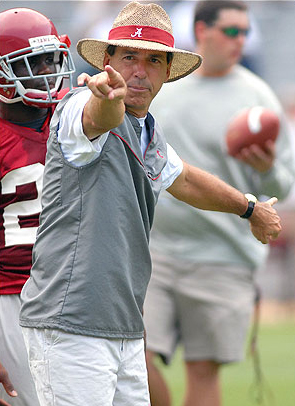 Did he know it would finish with Alabama clinching the division title? Only Saban knows the answer to that.

There are still challenges for this team to overcome. Auburn's season now comes down to trying to beat Alabama. And, if the Gators win tonight, Florida will be waiting when the Tide rolls into Atlanta.

But, for tonight at least, Alabama has completed yet another return to glory. However it ends, Shreveport is not on the Tide's agenda.