Road to Atlanta: Who Will Win the SEC Championship? -- Week 10

Share All sharing options for: Road to Atlanta: Who Will Win the SEC Championship? -- Week 10 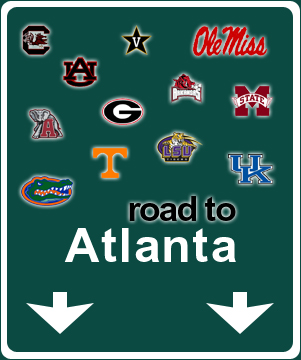 The drama has gone from fading away to rapidly evaporating. In fact, both division championships can be iced this weekend. Sure, there are still upsets possible -- Florida faces a classic trap game, and Alabama is up against a team that hates it. But the likelihood is that the dust clears Saturday evening with a clear picture of who will be in the City Too Busy to Hate the first weekend in December.

Alabama (9-0, 5-0 SEC; Magic Number: 2)
To lock up the Western Division championship, the Tide simply has to beat LSU this weekend. Do that, and the rest of the year is relevant only to Alabama's quest for the BCS title game.

Florida (7-1, 5-1 SEC; Magic Number: 2)
Again, the Gators clinch with a win this weekend. The magic number there, by the way, is for Vanderbilt; Georgia's elimination number is one. Even if the Gators lose this weekend, they can beat South Carolina and hope for the Commodores to lose against Kentucky or Tennessee.

LSU (6-2, 3-2 SEC)
The odds here are stacked heavily against the Bayou Bengals. Even if they defeat Alabama, they need the Tide to lose to Mississippi State or Auburn while LSU wins games against Mississippi and at Arkansas. If LSU wins this weekend and loses one of its remaining games, it will need the Elephans to drop both of their remaining contests.

Vanderbilt (5-3, 3-2 SEC)
That's right; they're still here. Georgia's loss actually helps the Commodores, since they still have a chance (however slim) to claim the tiebreaker with the Gators. A victory this weekend means Vanderbilt needs to defeat Kentucky and Tennessee to knock Florida out. (Florida could also lose to South Carolina and Vanderbilt would need just one victory in those two games.) That's where things get tricky, though; the Commodores need a third loss for Georgia, either at Kentucky or at Auburn. (Or, again, if Vanderbilt gets only one victory in its last two conference games, it needs Georgia to lose both its last two SEC contests.) Slim odds, but still there.

Georgia (7-2, 4-2 SEC)
Put simply: If Florida wins once more or the Dawgs lose one more, Georgia's only involvement in the SEC Championship Game will be as a spectator.

PREVIOUSLY OUT
South Carolina can technically still win under at least one almost unimaginable scenario I can dream up, but the odds of that happening are too slim to describe it in detail. It simply won't happen ...

MATHEMATICALLY ELIMINATED
Auburn is officially out of the running for the division championship almost everyone thought they would win, guaranteed to have more SEC losses (four) than Alabama will have at the end of the year ... Kentucky can, at best, tie Florida for the SEC East lead, and the Gators convincingly claimed that tiebreaker a couple of weeks ago ... Mississippi State is gone for the same reason as Auburn ... Eliminated earlier this season: Arkansas, Ole Miss, Tennessee