Share All sharing options for: Did Mark Richt cost Phil Fulmer his job?

There's not a lot more that can be said about the "resignation" of Phil Fulmer as head coach of the Tennessee Volunteers. The news doesn't come as a terrible shock to anyone; we all pretty much said this was a question of "when" and not "if."

So you can get the Tennessee perspective from Rocky Top Talk. Over at Dawg Sports, they're pointing out how the longevity ranks are changing among SEC coaches and why David Cutcliffe is not (in their estimation) a likely successor. And Year 2 has already outlined for you a Florida fan's begrudging respect for the Great Pumpkin.

But let us linger a moment longer on why Fulmer was forced to fall on his sword. Sure, he had two losing seasons in his last four years -- a not insignificant part of the groundswell that ended his time on Rocky Top. But take a look at his record against the Vols' three biggest rivals or competitors -- Alabama, Florida and Georgia -- from 1992 (when he gets credit for three games at the beginning of the season) to the "end of Fulmer the Great" in 1998, and then from 1999-2008.

Florida remained a problem for Fulmer throughout his career, though Ron Zook made it a bit easier for him (Phil was 2-1 against the Zooker). And the turmoil at Alabama allowed the Great Pumpkin to maintain a pretty good record against the Crimson Tide. But the swing in the record against Georgia is astonishing. In 1999 and 2000, Fulmer went 1-1 against Jim Donnan 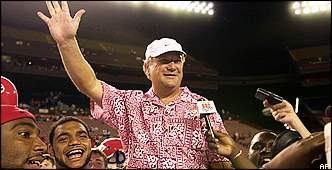 Thanks, Phil, for the free trip to Oahu.

Then, the Dawgs changed management, and Fulmer's dominance over the Red and Black came to an abrupt halt. Fulmer went 3-5, or .375, against Mark Richt. Suddenly, the race for the SEC East went from a two-team race -- Florida vs. Tennessee -- to a three-team race. And Tennessee began getting the edge in that race less and less often.

Yes, there are other reasons Fulmer won't return to coach the Vols in 2009, the paucity of SEC championships since 1998 chief among them. But part of that lack of championship berths can be traced to the rise of Georgia. So what if Georgia had made a mistake and hired someone else? What if Mark Richt hadn't come to Athens in 2001?

Certainly, Richt wouldn't be second-in-line to become the dean of SEC coaches. And it's possible that Fulmer wouldn't be giving up the title when the 2008 season ends.