Share All sharing options for: And Phil Fades Away -- Tennessee 28, Kentucky 10

Say what you want about Phil Fulmer -- and we all have said quite a bit during his lengthy tenure as head coach at Tennessee -- but the man loved his players. When Erin Andrews came out to interview him after the end of his last, emotional game against Kentucky, he asked her to wait a moment and allow him to pray with his players. After that, he resumed the interview and then was carried off the field on the shoulders of his players.

As it should have been. What happened to Fulmer in the last few years at Tennessee is hard to diagnose. Maybe he didn't recruit enough high-quality talent. Maybe he was never the same coach without David Cutcliffe. Or maybe the game has, to use the cliche, passed Fulmer by. 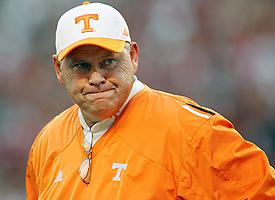 In any case, the irony is that Fulmer had finally found a way to win with this year's team: Run the ball until you can't run it anymore. And then run it again. The Vols ran the ball 53 times for 210 yards against Kentucky and attempted just eight passes, six of them completions that netted 101 yards. It was the second straight SEC game where Tennessee completely abandoned the pass -- and their second straight SEC win.

On Monday, we are told, Lane Kiffin will take the reins at Tennessee. And, at least for the present, Fulmer will be largely forgotten, unless he gets job somewhere else. (In Starkville, perhaps?) But, in our later years, it's likely that many of us will once again have something to say about Fulmer.

Until then, he went out a winner of his final game. Love him or hate him, that's also how it should have been.