Then came the 8-win, luck-fueled season of 2007, and it seemed that Croom might be able to get enough time to get something started. 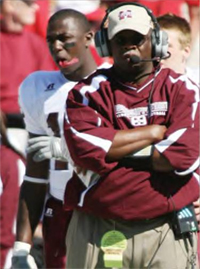 The windows of Starkville are safe with Croom's voice gone.

To be fair, there were problems at Mississippi State before Croom arrived. Jackie Sherrill went 3-8 in 2001, 3-9 in 2002 and 2-10 in 2003. But save last year's fluke, Croom did nothing to remedy those issues. Yes, he was saddled with NCAA sanctions from the Sherrill Era, but no one who's watched this team over the last few years can see any tangible signs of progress.

Probably not even Croom, were he honest.

It's not a surprise that Croom resigned; there was no one Mississippi State could fire the first black coach in the SEC. But expect that to still be an aspect of the coverage. Fair or not, this is the Deep South we're talking about, and Croom was the SEC Coach of the Year last season and just had that 8-win season. It wil come up.

For that reason, I wonder if the Mississippi State administration tried to avoid this. There was a good deal of talk about the possibility of Croom being asked to fire offensive coordinator Woody McCorvey and the likelihood Croom would resist getting rid of his most loyal and trusted assistant. Perhaps Mississippi State gave Croom that ultimatum and he declined, leading to a request for the head coach's resignation. All of that, though, is likely to come out over the next few days.

As to who might appear in Starkville for next season -- who knows? Bobby Johnson is a possibility, I suppose, though a long shot. Any Bulldog fan who thinks the school can draw a "name" coach is probably in for a rude awakening, unless Tommy or Terry Bowden qualifies as a name coach. Both could be considered here, though Terry's name will likely be quickly removed from the list. Then there's always Bobby Petrino ...