Share All sharing options for: Thanks for the memories? Doubtful -- Arkansas 31, LSU 30 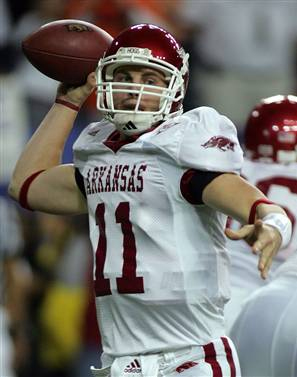 It could be hard at times this season to find someone to root for at Arkansas. The fans, who forced Houston Nutt out after his success there? No. Bobby Petrino, who bolted from the Atlanta Falcons midseason to take yet another coaching position that he said was his dream job? No.

Then, there was Casey Dick, a quarterback under siege for almost his entire career despite helping lead the Hogs to an SEC West title and 10-win season in 2006 and a Cotton Bowl berth last year. Starting Dick as often as he did was one of the things that led to the end of Nutt's tenure at Arkansas, and starting was something Casey Dick did not do Friday against LSU. Instead, that job went to his brother, Nathan Dick.

But down 23-14 at the half, having watched his offense's 14-point first quarter turn into a shutout second quarter as LSU put up 20 to take the lead, Petrino turned again to Casey Dick, who threw for 2 TDs in the win, including one with 22 seconds left to clinch the 31-30 win.

For LSU, the loss means even a trip to Atlanta for the Chick-fil-A Peach Bowl becomes dicey. The Music City Bowl or even the Liberty Bowl could now await the Bayou Bengals in the postseason.

For Arkansas, it was a reminder that Casey Dick was, in his time, a pretty good football player -- not a great one, not an outstanding one. But, at least on Friday, one who was good enough.