Where did that come from? Ole Miss 45, Mississippi State 0

Share All sharing options for: Where did that come from? Ole Miss 45, Mississippi State 0 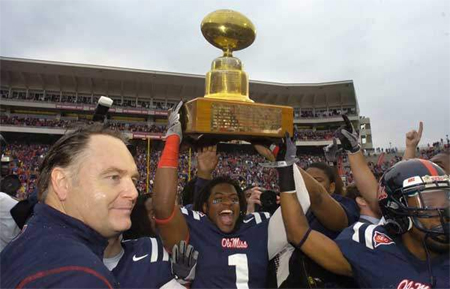 'Which bowl is Arkansas going to this year?'

What happens when you take a head coach shunned at his old school after incredible success, a quarterback who transfers after finding himself below a Heism@n-contending starter on the depth chart and a team that that won just 10 games and 3 SEC match-ups over its last three years?

Why, a trip to the Cotton Bowl, of course.

That's what Ole Miss locked up Friday after clobbering Mississippi State 45-0 and watching LSU fall 31-30 to Arkansas in a last-minute thriller in Little Rock. Several people saw the Rebels improving -- I was sort of on the fence -- but few anticipated a second-place SEC West showing and a visit to Dallas this year.

Mississippi, though, beat Mississippi State the same way they beat LSU and other teams before them: A nice day from QB Jevan Snead (14-of-19, 213 yards, 4 TDs, 1 INT) and a marauding defensive line that sacked Mississippi State's three signal-callers a jaw-dropping 10 times and held the Bulldogs' running backs to 18 yards. Mississippi State finished the day with minus-51 yards rushing and just 37 yards in total offense. 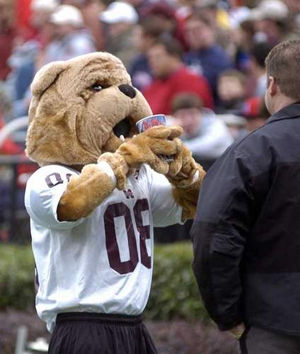 It was enough to drive Bully to drink.

Aside from Snead, the player of the game for Ole Miss was WR Mike Wallace, who grabbed four passes for 105 yards and 2 TDs and tacked on 28 yards rushing in his final regular-season game. You would say that's not a bad way to end a career -- but for the first time for Wallace and his fellow seniors, the year didn't end with the Egg Bowl. It ends in January -- in the Cotton Bowl.

For Mississippi State, the denouement of an awful season brings a tricky question: What to do with Sylvester Croom, who led the Bulldogs to an 8-5 season last year with an array of smoke and mirrors, then saw it dissolve into a 4-8 nightmare this year. 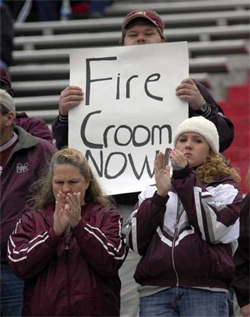 Okay, so maybe it's not a tricky question for some.

It's fair when Croom's supporters point out that he was hampered his first two years by NCAA sanctions left over from the previous regime. But it's also fair when critics note that there hasn't been any consistent improvement over Croom's tenure; he won three games in 2004, three in 2005 and three in 2006 before last year's dubious "breakthrough." And he has retained Woody McCorvey, which could be a firing offense itself.

Before Friday, at least Croom was 2-2 against his cross-state rival. But with the most recent defeat, even that defense has been taken away.