It's time for the annual set of season-ending clashes between the SEC and the ACC, with an extra game this year (Vanderbilt at Wake Forest) and the added intrigue from the ACC being an awful, schizophrenic mess. 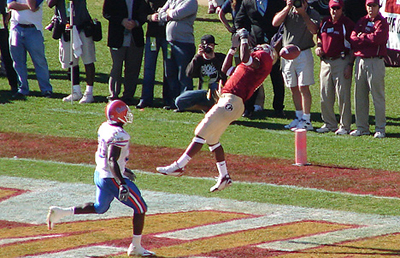 ACC, we regard you and your mediocrity with -- well, confusion, mostly.

Actually, the SEC-ACC matchup this year has been almost as much of a yo-yo as the Athletically Challenge Conference itself. The conferences are 3-3 against each other, something for which we really have the state of Mississippi to blame.

Fortunately, we don't have Mississippi or Mississippi State to worry about this week, though Vanderbilt has another opportunity to embarass the league when the Commodores travel to Wake Forest.

The most likely upset -- though all rivalry games are really likely upsets waiting to happen -- is Georgia Tech's trip to Georgia, in part because the Dawgs are trying to maintain a streak that would be historically long for Georgia in a series known for stretches of dominance by one team or the other.

Then there's the momentum Tech might have built up -- momentum being a hard thing to judge in the ACC -- by waxing Miami last week. The Yellow Jackets now rank 4th in the country in rushing offense under Paul Johnson's triple option system, ringing up 270.8 ypg. Georgia has a tough run defense, but the Jackets also have a strong pass defense to counter the Dawgs' air attack.

And though Georgia fans will complain about my saying this, I'll say it: They don't do well against spread offenses. Georgia almost got run out of the Georgia Dome -- a de facto home field -- by West Virginia during the first half 2006 Sugar Bowl. And despite winning one of the games, Georgia has given up 79 points in the only two games against Urban Meyer's spread. (No, 2005 and 2006 don't count; no offense with Chris Leak as its starting QB is Meyer's spread.)

At the same time, South Carolina heads to the Upstate to play Clemson. (Must...be...good...) The Gamecocks have had a much better season than the Tiggers Tigers, even though the teams both have lackluster offenses and powerful defenses. Steve Spurrier is trying to even his record against the farmers Clemson at 2-2, and has dubbed this "our biggest game of the year," indicating he will likely have three or four trick plays cooked up.

Not that the cows Tigers don't have their own added motivation. They need a seventh win to become bowl eligible because a team that expected to be in the national title conversation somehow felt it necessary to schedule two FCS teams. And while Dabo Swinney might keep his spot as head coach in any case, a win over the Gamecocks would make that a near certainty. (There, I think I treated the rednecks from the cow pastures pretty fairly, don't you?)

Florida has a different kind of motivation: Making the SEC Championship Game with a chance to play for the BCS crown. All that stands in their way are the Florida State Seminoles. Both teams have powerful offenses, though the Gators' attack redefines "powerful" (11th rushing, 18th total) while FSU's settles for being merely good (28th rushing, 45th total). Florida State might be the best defense Florida has faced this year -- though we've heard that before, haven't we, and it didn't do Georgia, South Carolina or Kentucky much good, did it?

If there was a major criticism of Spurrier during his tenure on the sidelines of the Swamp, it was that he was too focused on winning the SEC to bother much with the Seminoles, and didn't defeat Florida State very often. In fact, if Urban Meyer wins this weekend, he'll tie Spurrier for wins against the Seminoles with four. That would be four in a row; Spurrier never beat the Seminoles in consecutive years as coach (though he tied them in 1994 and won in 1995).

The SEC-ACC clashes wrap up at Wake Forest, where the Deacons take on the Dores in a clash of teams that really have no business attempting to play offense at all. Wake is ranked 106th in the country; Vanderbilt, 117th. That would be out of 119 teams. Both win close games with opportunism and occasional luck; each has won just two games in which their opponent scored more than 20 points.

Both also started strong; at one point, Vanderbilt was 5-0 and Wake Forest was 4-1. But the parallel seasons continued, and they face each other this week with identical 6-5 records. A win here will only go so far to soften the last-season disappointment.

Saturday begins with the leagues hold .500 records against each other. It ends the same way.

Would that I could offer Mississippi State fans some better hope than "It's a rivalry game! Strange things happen!" But that's really the only reason for optimism this week among the fans of the Fighting Crooms. The Bulldogs feature an almost uwatchable offense paired with a mediocre defense.

Ole Miss, meanwhile, has been the model of competence, registering 393.0 ypg in total offense while holding opponents to 318.3. It's not difficult to win games that way, and the Rebels are coming off a blowout win against LSU. Another cakewalk for Houston Nutt and Co.

If you're Arkansas, what do you do for an encore after upsetting the eventual national champions at their stadium in triple overtime? How about lose to a team with little more to play for at this point than revenge?

There's not much room for LSU to improve their bowl bid; they seem locked into a Peach Bowl appearance, though a loss paired with a Vanderbilt win could potentially leave the Tigers headed to Nashville in December or Memphis in January. The Tigers are long gone from the national title discussion, eliminated from a chance at the SEC championship and left out of the polls.

For their part, Arkansas fans have gotten their long-awaited pass offense but not much else out of this year's Hogs. The Razorbacks are ranked 2nd in the SEC in passing offense but 11th in rushing and dead last in the fou most important defensive categories (rushing, pass efficiency, total and scoring).

Yes, I said this game was also a likely upset, and I stand by that -- but thinking that there's a good chance for an upset and thinking that an upset will actually happen are two different things. And there's really no reason in this case to believe the latter.

While most of Auburn's numbers on offense are more respectable than the league's bottom-dwellers -- come on, really. This has been the most confused, hard-to-watch, downright dreadful offense to plague the SEC in years. The Tigers have scored more than 30 twice -- against Louisiana-Monroe and Tennessee-Martin, though Tide fans would be well-served to remember how many points Alabama scored against the Warhawks the last time those two teams met. In three other games, Auburn scored more than 20 points -- and lost two of them. How do the Tigers score against Alabama's top-notch defense? Beats me.

Sometimes, when you're that bad on offense, a good defense helps. But Auburn is only middling on defense this year, and the combination has lead to defeat after defeat, though the Tigers usual high-quality nonconference schedule has left Auburn with a slim chance at a .500 season if they can somehow defeat the Tide.

Good luck with that. Criticism of style points aside -- and I've been one of those critics -- Alabama has been a machine this year, and it will take a better team than Auburn to dash hopes in Tuscaloosa of an undefeated season. Say, a team with a settled quarterback situation and a chance to slow down the Tide's relentless rushing attack, which averages 198.6 ypg.

As with many of Alabama's league games, the Tide won't win by more than a touchdown or two. But win they will.

This, in case you haven't heard, is Phil Fulmer's last game. And, in that case, welcome back; how was your trip to Kabul?

Fulmer would, of course, deserve in some sense to go out a winner, and he has a reasonable chance of doing that this week. Kentucky has lost two in a row, one forgivable (to Georgia) and the other marginally acceptable (to Vanderbilt).

But even in defeat, Wildcats' offense finally appears to be clicking. The 62 points scored against the Dawgs and the Dores mark the most against any two SEC opponents and the most in consecutive games this season since the Cats began playing teams that actually had any business being on the same field with them. Their scoring average in their last two games is nine points higher than it was in the first nine games.

Tennessee's offense, meanwhile, has never found its footing. Last week's win over Vanderbilt marked the first time the Vols had scored 20 or more points in a month. (Fairness: There was a bye week in there.) And it was only the fourth time all year Tennessee put 20+ on the board. The lowlights: 6 against Florida, 9 against Alabama, 6 against South Carolina and 7 against Wyoming. Yes, that Wyoming.

It is going to be an emotional night in Knoxville, and it's hard to tell if Kentucky is walking into an ambush or waltzing into an easy victory. Let's go with the former.