Theorems and Stratagems of the Game, Week 12: Decisions, Decisions

Share All sharing options for: Theorems and Stratagems of the Game, Week 12: Decisions, Decisions

Not much in the way of botched calls this week. Most coaches are hitting their stride and many fans were apathetic about a week that featured no high-profile rivalries, few battles between ranked teams and fewer upsets.

So would Vanderbilt over Kentucky count as an upset? Probably not. But either way, Truzenzuzex at A Sea of Blue is perplexed by some of the decisions made by offense coordinator and head coach upon purchasing a vial of arsenic in waiting Joker Phillips.

[In the first half:] Every call was some kind of pass. Did he forget that [QB Randall] Cobb is much more dangerous on the ground, and that the triple option actually works? Were we afraid we couldn't recruit if we moved the ball with the option, or what? [...] Opponents rarely throw the ball at Trevard Lindley, and they rarely throw the ball at D.J. Moore ... Oops ... except for Kentucky. Stupid.

In the HCIW's defense, three of Kentucky's first seven plays are listed as runs in the play-by-play. However, two of those runs were by Cobb, so they could have been busted pass plays. It's also worth noting that those seven plays were all Kentucky got before the 2:49 mark of the first half. At that point, down 21-7, Kentucky needed a quick score -- and even had three rushes, one by Cobb, in eight plays. (One, it should be noted, they didn't get.)

As for the throwing at D.J. Moore, particulary during a last-chance drive at the end of the game -- yeah, I got nothing. The only way that should happen is if your offensive coordinator runs out of the film room yelling "NYAH! NYAH! NYAH! I'M NOT LISTENING!!!" 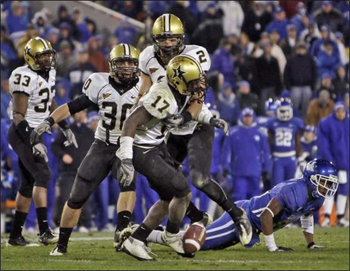 Mr. Phillips, D.J. Moore thanks you for your generosity.

Meanwhile, Charlie Weis isn't scoring points with the Irish faithful for failing to be part of that non-American America we keep hearing about.

The scenario: Nine minutes left in the game, up by 20. Soon enough to put your back-ups in? Apparently not when you're Notre Dame trying to keep Navy from beginning an (snicker snicker) winning streak against the Irish.

And all game the announcers are talking about how Navy never quits. THEN WHY DID WE? I understand that Weis doesn't want to embarrass the academies, but these are men you're playing against, not fifth-grade girls.

Personally, I'll be impressed when Weis promises to give up his omnipresent Diet Coke for his country .

And, finally, it might be time to hang up the headset when you can't get through your pregame pep talk -- um, without notes?

Strangely, this is more coherent than any of Lou Holtz's Thursday night pep talks from last year.