How good is Florida, really? Sure, the Gators dismantled Georgia 49-10, but the Dawgs made plenty of mistakes along the way and there were a couple of questionable calls. There's no doubt the better team won; there's a lot of doubt (at least in my mind) about how much better Florida actually is.

Is it now more or less likely that the SEC gets two teams in the BCS? It's virtually a given now that Alabama will meet Florida in the SEC Championship Game. But will the loser of that match up get into one of the big money games? Consider: All six conference champions get in, leaving four slots. You can bet another Big XII team gets in; we're down to the three places. Boise State and/or Utah get in -- now there are two spots remaining if one gets in, and one remaining if both bust the system. If Oregon State wins out, they take the Pac-10 crown and Southern Cal would also be in the running. So could a one-loss Alabama or two-loss Florida get in after losing the championship?

Who's No. 1? Or, for that matter, Nos. 2-4? I'm asking for BlogPoll help up front this time. Here's the chart of the teams I plan to name as my top 4, with the teams arranged alphabetically and the results arranged chronologically so my assumptions don't color the discussion. 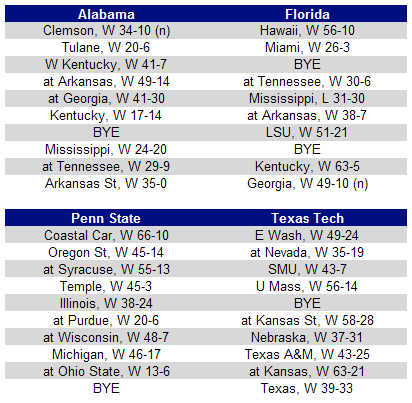 Has Arkansas really improved that much? Or was Tulsa horribly overrated? And if you're going to cop out by saying "a little bit of both," then at least add how much of each you think it is. Consider that the Hogs cranked out at least 380 yards of total offense against three of their last four opponents (Auburn, Ole Miss and Tulsa; fell short against Kentucky).

Is Tim Tebow back in the Heism@n race? Colt McCoy probably lost a good deal of stock Saturday, even though he had Texas in a position to win. So, does the SEC's golden boy find himself back in contention, despite his "reduced numbers"?

Is Fulmer now a liability for Tennessee? There were some decisions Saturday night that seemed to suggest desperation on Tennessee's part -- going for it on fourth-down instead of kicking a field goal down 21-0 early in the third quarter; going for two after a TD cut the deficit to 24-6 with more than 18 minutes left. The players looked flat after South Carolina took the lead early. And it can't be good for recruiting purposes. Is it best to fire Fulmer now, or continue the uncertainty surrounding the team?

As always, the wrap-up comes along later in the day.