Share All sharing options for: Meet the New Florida, Same as the Old Florida: Gators roll again, other Week 12 action 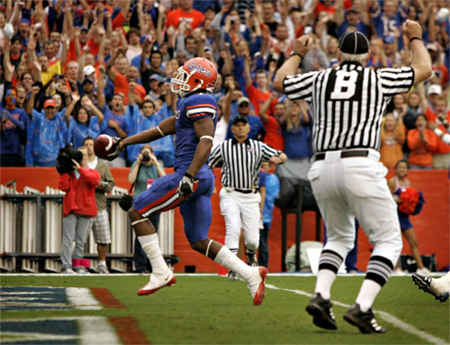 This stopped being fair for Florida's opponents a long time ago. Since Mississippi upset the Gators back at the end of September, the Gators have scored 38, 51, 63, 49, 42 and 56, shredding some of the most respectable SEC defenses along the way.


*Standings actually from after Kentucky allowed 304 yards against Mississippi State; the NCAA Web site has wiped out Week 9 rankings, for some reason.

Every week, we say that this team or that team will challenge Florida, give them the game that we've been waiting for, have an outside 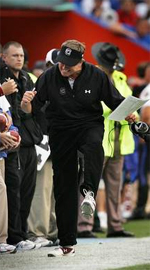 chance at upsetting the mighty Gators. And every week, Florida says no, no and no.

South Carolina was no different. Here was the third-best defense in the land, heading into the Swamp with a chance at slowing down Florida's high-octane attack. The result, though, was the same: At the end of the game, all that remained on the other sideline were the charred remains of the opponent's dignity.

Tim Tebow was solid once again, going 13-of-20 for 179 yards and 2 TDs. Percy Harvin carried for 167 yards -- on eight carries, an absurd average of 20.9 ypc. He scored twice. Chris Rainey, Jeffrey Demps and Tebow each accounted for one touchdown on the ground.

But the story of the game early on was one of South Carolina's mistakes: In a span of 2:15 in the first quarter, the Gamecocks threw two interceptions and botched a lateral on a kickoff return, setting up three Florida scores that put that Gators up 21-0 and placed the game out of reach.

Plagued by Steve Spurrier's decision to continue his QB rotation, the Gamecocks threw three interceptions in the game and never scored a touchdown. They averaged a paltry 3.2 yards per pass attempt, converted just one of 15 third-down opportunities and gained just 173 yards of total offense. And their vaunted defense continued to watch Florida players dash toward the end zone time and time and time again, occasionally giving chase, never with any success.

The question now seems to be less one of whether Florida will be favored against Alabama and more one of how large the spread will be. Alabama has a solid defense, sure -- but so did Kentucky, Georgia and South Carolina. It did none of them any good. The Gators offense is looking less and less like a team of mortals and more and more like a force of nature.

After all, if the then-best defense in the SEC can't stop them, who can?

THAT WAS FUN WHILE IT LASTED
Alabama 32, Mississippi State 7
Roll Bama Roll (Alabama)

For a few brief moments, it looked like Mississippi State might take a shot at providing this week's upset of a Top 10 team. But, no -- less than six minutes after Tyson Lee connected with Jamayel Smith for a TD that put the Bulldogs ahead 7-5, John Parker Wilson dived into the end zone to take a 12-7 lead that would have been enough.

The Tide decided to keep going, churning out 198 yards rushing and piling on another 20 points to put the game decisively out of reach. It was typical Alabama football: after looking shaky early on, John Parker Wilson was steady if not spectacular, Mark Ingram and Glen Coffee ground out the yards and the defense simply didn't surrender much. Mississippi State would gain just 167 yards all night, including a laughable 35 yards rushing, adding even more mystery to the question that continues to, pardon the pun, dog Mississippi State: Why is "offensive coordinator" Woody McCorvey still employed?

Given that the Bulldogs have scored more than 17 points just three times this year, and one of those times against an FCS team, you have to think that won't be a question much longer. One can easily see Sylvester Croom being given an option at the end of the season: Give McCorvey his walking papers, or accept your own.

Speaking of doing things the way they've done them all year: The Dawgs picked up 351 yards of offense, 95 yards of penalties and an uninspiring 17-13 win in the most meaningless Georgia-Auburn game in years.

Matthew Stafford was solid (15-of-24, 215 yards, 2 TDs) and Knowshon Moreno was as spectacular as usual (22 rushes, 131 yards), and yet Georgia had its typical breakdowns: a 10-play, 80-yard drive to begin the game ending in a blocked field goal; an incomplete pass on 4th-and-9 from the Auburn 29; and a 3rd-and-7 incompletion on the Auburn 10, leading to a field goal.

But a missed extra point early on forced Auburn to go for the conversion on fourth down twice in the last five minutes, once on the Georgia 21 and once on the Georgia 14. Those are field goals from 38 yards out and 31 yards out, for those keeping score at home. Granted, those are no sure things for Wes Byrum, who has converted just 57.9 percent of his field goals this year and missed one from 42 yards out in this game. But they're better gambles than fourth-down conversions.

Georgia might have done little more by winning this game than make Auburn much more dangerous for Alabama. At 5-6, Auburn now has only one chance to make a bowl: Remove the hated Tide from the BCS title picture by defeating them in two weeks.

Of course, that would be the ultimate revenge for Georgia, knocked out of the NC race by their loss to Alabama in Athens. And it would make this game more significant than its place in the SEC standings would ever indicate.

DO WE REALLY HAVE TO GO TO NASHVILLE AGAIN?
Vanderbilt 31, Kentucky 24
Conquer and Prevail recap (Vanderbilt) :: A Sea of Blue recap (Kentucky)

I've already pretty well covered what this game means to Vanderbilt. For Kentucky, things are a bit more ambiguous. The Wildcats have now lost five of their last seven, a more spectular collapse than perhaps even the fiercest critics of their cupcake-filled early-season slate anticipated.

This is a list of Kentucky's victims: Louisville, Norfolk State (FCS), Middle Tennessee State, Western Kentucky (transitioning to FBS), Arkansas and Mississippi State. Even Tennessee would have had a shot at bowl eligibility with that schedule.

The Vols, coincidentally, are Kentucky's final opponent; the two teams will meet in Knoxville in two weeks. Even a victory against Tennessee, though, might not mask the fact that Kentucky got into a bowl via scheduling. Which might be enough to knock the 'Cats back down to the Music City Bowl or, if the Nashville-based postseason game doesn't want a third UK visit in a row, the Liberty Bowl.

LSU 40, Troy 31 :: And the Valley Shook recap (LSU)
It somehow feels wrong to say there isn't much to write about this game, but beyond "Hahaha Troy!!!!", there really isn't. Yes, it took a 30-point surge in the last 16-and-a-half minutes for the Bayou Bengals to beat a good Sun Belt team. But this was always going to be a rebuilding year for LSU. The only question left after the wipeouts against Florida and Georgia was how much rebuilding would the Tigers have to do; now we know. Les Miles has a ton of talent on this team, and the rough denouement to this season will either strengthen the players or destroy their confidence. Miles will need all of his coaching skill to make sure it's the former and not the latter.

Mississippi 59, Louisiana-Monroe 0
What a difference a year makes. Houston Nutt has clinched his first bowl berth and perhaps permanently cleansed this program of its Orgeron-induced swoon. Agains the Warhawks, Ole Miss did what Alabama could not last year: thoroughly defeat an outmanned opponent, ringing up 520 yards, holding ULM to 131 and cruising to an easy win. Things are looking bright indeed in Oxford.