Theorems and Stratagems of the Game, Week 11: Under Center

Share All sharing options for: Theorems and Stratagems of the Game, Week 11: Under Center

Few would argue that there has been a better college quarterback coach -- or a more skilled master of quarterback psychology -- over the last two decades than Steve Spurrier.

And yet, his latest QB strategy at South Carolina boggles the mind. If a two-quarterback system really means you don't have one quarterback, what to make of the complicated manuevering that Spurrier is trying now?

Coach Steve Spurrier indicated during his Tuesday news conference that Chris Smelley and Stephen Garcia again will alternate plays against Florida after the strategy produced a 34-21 victory against Arkansas on Saturday.

"There’s a chance we may do that," Spurrier said. "We’re going to try and play them both, some way or another. There may be a spot where they stay in there two or three plays in a row, just have to look and see."

There is precedent for Spurrier rotating quarterbacks in Gainesville. He did it several times in the late 1990s while coaching Florida, including the 1997 home victory against Florida State.

Yes, Spurrier had some success alternating quarterbacks at Florida. But did the constant change at quarterback Saturday really "produce a 34-21 victory against Arkansas"?

At least Spurrier doesn't necessarily see things staying like this.

Spurrier hopes to eventually settle on one quarterback. This situation is a result of having two who "deserve to play, and really neither have separated themselves."

"We don’t want to do that forever," Spurrier said.

That's comforting, since after Saturday's showdown with the Gators, South Carolina can enjoy having a full-time starting quarterback for ... one regular-season game. Better late than never, I suppose.

3SIB uses four words that should never be used in relation to a loss, or any game really: "Crompton finished the game."

Crompton finished the game — and by "finished the game," yes, I mean the coaches actually MADE THE DECISION TO PLAY JONATHAN CROMPTON FOR THE FINAL THREE QUARTERS OF A GAME WE LOST AGAINST WYOMING — 11-of-27 for 95 yards and a tower of female organs. ...

This quarterbacking decision alone is reason enough to fire Fulmer, not to mention the other 1,000 wrong choices he’s made this season to help make our proud program a laughingstock.

Not sure what that last stat for Crompton actually is -- or if it's a good or a bad thing. 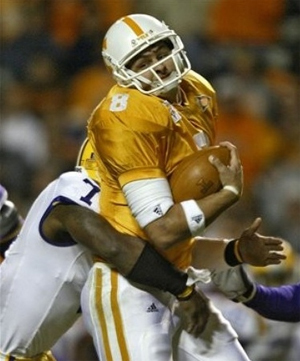 One hopes it's more enjoyable than this.

But suffice it to say, Ghost of Neyland was not pleased with the signal-caller's performance.

SBN colleague Black Shoe Diaries, meanwhile, wanted to see Daryll Clark pulled near the end of the game against Iowa -- a 24-23 upset that smashed Penn State's national title dreams. A strategy for the first drive that made sense would have helped, too.

I'm sure they were on the field before the game started, so they must have known they were starting out heading into a 34 degree 25 mph wind. So why do we come out trying to throw the ball on the first three plays? It was a colossal failure to observe the conditions and adapt.

Please -- this is the Spread HD. Nothing can stop JayPa -- not even nature itself. The Iowa Hawkeyes, on the other hand ...