Share All sharing options for: World Series of Poker: The SEC Coaches

In honor of the final table at the Main Event of the World Series of Poker on ESPN tonight, we bring you a never-before-seen episode of the series featuring the head coaches of the SEC.

LON McEACHERN: Hello, from Las Vegas, I'm Lon McEachern with Norm Chad, bringing you a very special edition of the World Series of Poker. Tonight, we have the head coaches of the SEC.

NORMAN CHAD: Well, as my divorce lawyer always says, let's get this over with.

LON: The action tonight will begin with Houston Nutt. 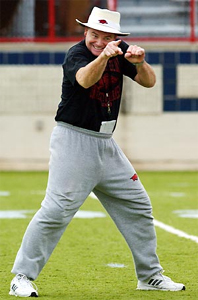 LON: And Nutt comes in with an King-Queen suited. Over to Steve Spurrier, who has a seven and a five.

LON: We fold around now to Les Miles.

LON: So Miles goes all in with a four and a two. And Nutt will fold! Miles picks up the pot.

So now, we start the next hand with Steve Spurrier, who once again gets a seven and a five.

SPURRIER: Fold. Seven and five, seven and five -- when am I going to draw something else? I'm about ready to start golfing again.

LON: Now to Sylvester Croom, who apparently -- I don't believe this, Norm -- he's only been dealt one card, though it is an Ace of hearts.

NORM: A brother can't get a break.

LON: What would you know about that?

NORM: My seventh wife was black.

LON: So, with only one card, Sylvester Croom has gone all in. And Bobby Johnson will call with King-Queen of spades. Eveyrone else folds to get out of the way. We go to the flop: 2 of clubs, 4 of spades, nine of hearts. No help to Croom -- or Johnson. We are unable to calculate odds at this point, since Croom has only one card. The turn card is a three of diamonds, still no help. And the river card is ... the Ace of spades! Croom wins the pot with one card! And Bobby Johnson is eliminated!

FULMER: [Guilty look, cheeks puffed out] Mwha chimps? [Finishes chewing] Clawson was supposed to get me some donuts. Clawson!

LON: Several of our players fold, and now we have Mark Richt joining the action out of the small blind. He'll call with pocket Jacks.

URBAN MEYER: Which one are you? 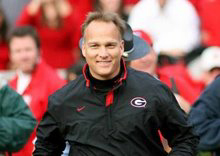 RICHT: [Dressed entirely in black] C'mon. You really think choirboy wants anything to do with poker? This is Evil Richt.

[Meyer eyes him as if he doesn't believe him.]

LON: Meyer goes over the top with pocket 10s. He could be in trouble here.

LON: And Richt turns over his cards and shows Meyer the set.

MEYER: That wasn't right.  It was a bad deal. It will forever be in the mind of Urban Meyer. We'll handle it, and it's going to be a big deal.

RICHT: Yeah, whatever, ya Midwestern pansy.

LON: Now, for this hand, action over to Tommy Tuberville.

NORM: Yeah, but with cards like a duece-four off-suit, he'll be over quicker than Chris Todd's career if he calls.

BROOKS: This is B.S. [Walks away from table and out of the room.]

DEALER: No, Mr. Petrino, you have to play the hand you've been dealt.

PETRINO: Oh. Then I fold.

SABAN: I don't have time for this game. All in.

LON: And Saban goes all in with four-five of hearts. Now, we fold around the table to Mark Richt, who has pocket queens.

NORM: And Richt is still alive, like my third wife -- unfortunately.

LON: And the river is -- a six of hearts! Saban wins the pot!

DEALER: Mr. Nutt, please get off the table. And -- Mr. Fulmer, would you please stop eating the table?!?

LON: Well, that's all the time we have for today, ladies and gentleman. But please be sure to join us next week for an exciting edition fo the World Series of Poker. Good night.

*As one of the commenters below points out, "Giggity" originated with EDSBS. I thought that was well known, but in case it wasn't, it was not my intent to steal, rather to imitate. Hopefully, for most, that intent came through.