Getting There is Half the Fun: Alabama, Florida clinch and other Week 11 action

Share All sharing options for: Getting There is Half the Fun: Alabama, Florida clinch and other Week 11 action 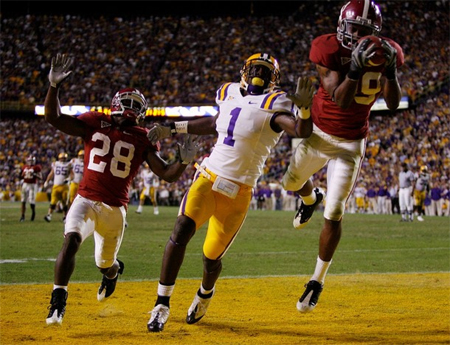 It is, perhaps, fitting that Alabama and Florida won their way Saturday into the SEC Championship Game in very different ways. After all, these are very different teams: Alabama, the flawed giant that has nonetheless found a way to defeat all challengers; and Florida, the offensive juggernaut that, aside from its inexcusable loss to Ole Miss, has pulverized everyone who has taken the field against them.

Both played to the script this weekend. The only unusual part is that Alabama didn't have its usual post-halftime swoon. The Tide fell behind LSU 14-7 early, tied things before the half, then battled through two more quarters and an overtime to ice the SEC West. The hero was not an offensive player, but rather Rashad Johnson, who picked off Jarrett Lee three times in the latest nightmare outing for LSU's freshman starting QB.

To put those interceptions into perspective: Only two of LSU's receivers caught more passes from Lee than did Johnson. (Those two would be Brandon LaFell and Demetrius Byrd, both with four.) Lee threw another pick to Rolando McClain.

Not that John Parker Wilson, the latest player to have his cell phone distributed to LSU fans, was much better. He completed less than 50 percent of his passes, threw an interception and no touchdowns -- though he did run the QB sneak for Alabama's first TD and did it again for the game-ending score. (A moment here: If LSU fans are going to keep doing the cell phone thing, which I think is fine as long as there are no death threats or anything, then the opposing player's phone pantomime should not result in a penalty.)

Wilson didn't make the kind of costly mistakes Lee did, though, and that ended up being the difference. Lee's mistakes resulted in points for Alabama and, in the case of an overtime interception in the end zone, a chance to extend the game.

Taking the field shortly after Wilson's last plunge in Baton Rouge, Florida once again relied on QB Tim Tebow to put the game out of reach early. Tebow ran for 88 yards, pass for 171 yards and a 213.32 rating and accounted for the Gators' first five touchdowns as Florida jumped up to a 35-0 halftime lead. At that point, thousands of Florida fans were likely already logging on to their favorite travel Web sites to book hotel rooms for early December in Atlanta.

Getting to the City Too Busy to Hate, though, is all that really matters. If both these teams get to the SEC Championship Game undefeated, and we all expect them to, then the title match is a play-in for the BCS championship tilt. The other team will most likely end in up New Orleans for the Sugar Bowl, which isn't bad for a consolation prize.

But neither of these teams came this far for a consolation prize. Having punched their ticket to Atlanta, the Tide and the Gators are focused on getting to Miami.

NOT QUITE WHAT WE EXPECTED
Georgia 42, Kentucky 38
Dawg Sports recap (Georgia) :: A Sea of Blue recap (Kentucky)

There's nothing wrong with winning a close game after Kentucky. After all, these are not your father's Wildcats, or for that matter your Wildcats, who for years battled Vanderbilt and South Carolina to be recognized as the worst team in the SEC East. So when Alabama gets by UK, 17-14, the Tide are still in the running for the national championship. When South Carolina manages a 24-17 victory, it's still a significant victory for the Gamecocks.

But when you beat Kentucky's somnambulant offense on a last-second interception after already allowing the Wildcats to ring up 331 yards, 20 first downs and 38 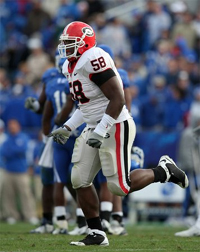 points, there are deep issues on your football team. It might be injuries, it might the rigors of playing a difficult schedule, it might be a hangover from being dissected by Florida the week before, but Saturday added a flashing siren to the "WARNING" sign already hanging on the Dawgs' season.

Fortunately for Georgia, they still have one of the most talented offenses not quarterbacked by Tim Tebow in the SEC. Matthew Stafford threw for 376 yards, Knowshon Moreno ran for 123 yards and Mohamed Massaquoi continued having a breakout season during his 17th year in the SEC. The Dawgs also have the schedule on their side: a visit to Auburn this weekend and, in two weeks, a rivalry game against resurgent Georgia Tech, which is probably still a step or two behind. A trip to Orlando still appears to be in the cards for Georgia.

Kentucky is bowl-bound, but to which bowl is still an open question. One that will likely be answered when Vanderbilt comes to Lexington on Saturday. Tennessee is a likely win, so victory over the Commodores would get the Wildcats to eight wins and put them in strong contention for a Peach Bowl berth, or even a trip to the Outback if South Carolina stumbles against Clemson. Not bad for a former doormat.

YOU PUT ONE QB IN, YOU TAKE ONE QB OUT ...
South Carolina 34, Arkansas 21
Garnet and Black Attack recap (South Carolina)

Both South Carolina and Arkansas used more than one quarterback to get through this one, but only one team chose to do so. Again, the head coaches for these teams are Steve Spurrier and Bobby Petrino. You can guess who chose to rotate his signal-callers on nearly every play.

Yes, Spurrier played the QB hokey pokey with Stephen Garcia and Chris Smelley, to limited effect. The two combined to go 13-for-30 for 219 yards, two touchdowns and an interception -- which gave them two fewer picks than Casey Dick, who came out of the game for brother Nathan following a potential concussion. The Gamecocks also continued their recent we're-going-to-run-even-if-it-doesn't-work play calling, managing 132 yards rushing on 34 carries, a 3.9 ypc average.

But with Ellis Johnson's defense, South Carolina is usually going to win with 351 yards, even against a high-octane offense like Arkansas. Johnson tied the Hogs down, allowing just 54 yards rushing and 309 total.

Are the Gamecocks worth their Top 25 ranking? We'll see. A respectable loss to Florida and a win over Clemson should keep them in the rankings until their bowl game, where they can seal their first season-ending spot in the Top 25 since the 2001-02 season.

For Arkansas, the longshot dreams of a bowl game probably died in Columbia. Sure, the Razorbacks can probably win at Mississippi State on Nov. 22, but will likely be heavy underdogs against LSU in the season-ender the day after Thanksgiving. There will be better days for Petrino and Co., likely when Casey Dick isn't the quarterback coming out with a concussion.

Wyoming 13, Tennessee 7 :: Rocky Top Talk recap (Tennessee)
Not much more can be said at this point about the Vols. When your head coach has been fired and fans are openly debating whether this is your worst season ever, the year is officially beyond repair. This not the way Phil Fulmer, a man who cried as he gave up his job to avoid dividing the Vols fan base, deserved to go out. But this is exactly how he exits: Thoroughly defeated and tarnishing his legacy more with each passing loss.

Auburn 37, Tennessee-Martin 20 :: Track Em Tigers (Auburn)
This game could prove to be a Rorshach test for Auburn fans. Some will observe that it could have been worse -- Auburn could, after all, have lost to the Skyhawks. Others will say it could have been a lot better, and this is not a convincing case for Tommy Tuberville to keep his job, even if it does give Auburn's flickering bowl hopes a faint pulse. In the end, the future of the program will be decided in the Iron Bowl: Defeat Alabama and Auburn will go to a bowl game having potentially derailed the Tide's national title hopes. Anything less might not do it.