If I could take back one thing I've written at Garnet and Black Attack since the South Carolina season began, it would be this.

We lost. To Vanderbilt. Deal with it.

In fairness, this was only the second game of the season, and there was no way to tell that Vanderbilt would actually have its breakthrough year. But as the 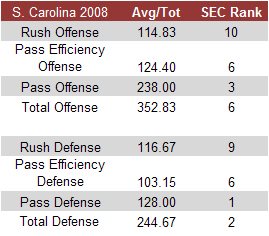 Commodores' fortunes have gone up, the loss has looked not quite so stinging. And South Carolina's season has seemed slightly more hopeful.

Only slightly, though. Your humble correspondent is one of those realistic South  Carolina fans, who from the beginning did not see this as the Gamecocks' breakthrough season. And it will not. To have any hope at the SEC East title, South Carolina needs Vanderbilt to lose three conference games and Georgia to lose two more -- as South Carolina wins out. Vanderbilt might lose three conference games. The other two conditions each seem unlikely, to say the least. It's almost impossible to see both happening.

So what will it take for South Carolina to salvage this season? It depends on what you mean by "salvage." Coming into the season, most Gamecock fans wanted to see at least eight games to mark progress from last year's 6-6 disaster. Make no mistake, then, about the importance of the win against Ole Miss: That might have saved South Carolina's season. Now, eight wins are still possible. South Carolina is likely to be favored vs. Arkansas and possibly vs. Tennessee, both at home. That means they need two more wins among: at Kentucky, vs. LSU, at Florida, at Clemson. So it's possible, but there's no margin for error.

But there are good signs for the Gamecocks. Chris Smelley appears to finally be vanquishing his inner Blake Mitchell. Kenny McKinley is back on the field. Ellis Johnson has ably guided the Gamecocks' defense. 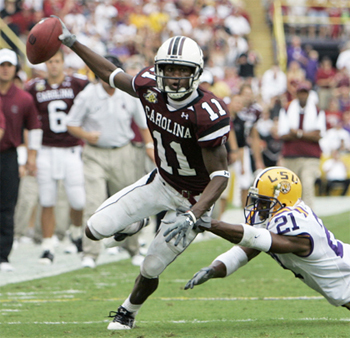 No pressure, Kenny. Just save the season.

The run game, though, must get better -- on both sides of the ball. In fairness to South Carolina's defense, they've some of the best rushing attacks in the NCAA, including Vanderbilt (36th nationally) and Wofford (2nd in the FCS); of their opponents, only N.C. State's rushing offense falls outside the top 50. And if you give up only 128 ypg through the air, well, you can live with the opponent having moderate success on the ground.

There is no reason, though, to be fair to the South Carolina offense. It is difficult to win in the SEC rushing for less than 120 ypg. If the running game continues to be sluggish, South Carolina will likely plod across the finish line once again.

In that case, 6-6 looks about right. For the sake of argument, we'll say the ground game improves. Removing homerism, it looks like 7-5 for the Gamecocks. Progress, but not enough.