This was not supposed to be the year that Nick Saban managed to turn the Crimson Tide around. Not like this. After all, it was St. Nick himself who stood in front of the assembled reporters at SEC Media Days and said

You know, eight years ago I started out not having a lot of success either, but you have to build. And that's what we're trying to do right now, is build on positive energy and a great opportunity so that we can have success in the future.

Your humble correspondent was among those who took St. Nick's exhortations to tone down expectations as a sign that he, well, wasn't expecting much. Then 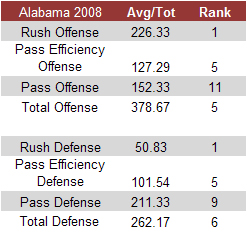 came the win against Clemson at the Georgia Dome, and expectations went up a notch. The Tide then dispatched Tulane (sort of), Western Kentucky and Arkansas.

By the time Alabama rolled into Athens to play Georgia, the "rising tide" metaphors were already flowing like waterfalls. And when Alabama demolished Georgia, they shot to lofty poll positions and became legitimate national title contenders.

Are we jumping on the Alabama bandwagon too quickly? Perhaps. It wouldn't be insane to question whether Clemson and Georgia are really as good as we all thought they were at the beginning of the season. After all, the Orange and Purple Tigers also lost to Maryland and the Dawgs struggled against South Carolina (as usual) and won against an Arizona State squad that now looks to have been a touch overrated.

On the other hand, no one can deny the power of the Tide's rushing attack, powered by Glen Coffee and (to a lesser extent) Mark Ingram and Roy Upchurch. Or Alabama's ability to stop the run, thanks in part to "Mount Cody." 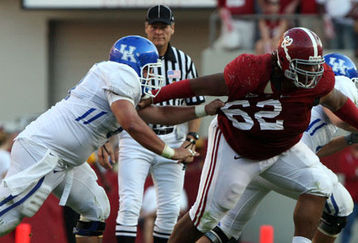 SEC Opponents: You're job is to stop this man. Good luck with that.

The biggest question about Alabama coming into this season concerned John Parker Wilson. Could he win a game on his own if he had to? So far, he really hasn't had to. Wilson played like the second coming of Jay Barker against Clemson and Georgia. Wilson has also lagged, though, notably against Kentucky (7-of-17, 106 yards, 1 INT) and Arkansas (6-of-14, 74 yards, 1 TD).

In any case, the Tide's ride to greatness is likely to continue at least until November. After a bye this weekend, Alabama faces Ole Miss at home, Tennessee in Knoxville, Arkansas State at home. The next game that should be challenging for them is at LSU on Nov. 8. Get through that, and all that remains are home games against Mississippi State and dysfunctional Auburn.

So, yes, Alabama can win the SEC West. The Tide might dip in the polls for a couple of weeks, given the weak slate, but the LSU tilt should now be the de facto division championsip game. So much for lowered expectations.