Theorems and Stratagems of the Game, Week 6: Tony a Tiger? Maybe not for long

Share All sharing options for: Theorems and Stratagems of the Game, Week 6: Tony a Tiger? Maybe not for long

For those of you unfamiliar with Theorems and Stratagems of the Game, which debuted over at Garnet and Black Attack, it's a weekly look at some of the not-so-great coaching moves from around the country with an emphasis on the SEC. And one of our favorites, Tony Franklin, provides a case study this week for the question that has vexed Tommy Tuberville and others for weeks: What, exactly, is wrong with the Auburn offense? Or is this the Auburn offense -- as good as it gets?

We're rapidly coming to midseason, and an official verdict on the Tigers' spread revolution, where five offensive touchdowns in four conference games is a strong indictment. ... The bigger point -- and I expect to hear plenty of this in the coming week -- is that whatever larger identity the offense is trying to establish out of four and five-receiver sets, it seems built for exactly the opposite.

The more specific question this week, of course, is what went wrong with the Auburn offense against Vanderbilt. The outlines of the debate were shaped by Kirk Herbstreit, the analyst for the Auburn-Vandy game, who giddily pointed out early in the game that this was Auburn football: A power-running game, largely out of the I-formation, forget this business about spreads and Air Raid and all that New Age, Yankee nonsense.

Again, though, the second Auburn drive began with promising rushes of 11, 1, 12 and 5. The Tigers starting mixing in the pass -- but nothing risky -- and managed to score a touchdown this time.

With all the success running -- and some of it continued through the second quarter -- one would imagine that an offensive coordinator would play to that strength. Then again, this is Tony Franklin. He doesn't believe in writing down gameplans or any of that nonsense. It felt right to pass. And so came this out of the gate in the third quarter:

It was if Bizarro Lou Holtz had taken over the offense, passing even when all evidence indicated it wasn't going to work.

Just add fans, and you have instant controversy that has pretty much raged unabated since then: Why did Tony Franklin start throwing the ball around in the second half? Even his players were asking the question.

... play-by-play shows Auburn passed on all six first down plays with Chris Todd in the lineup in the second half, hitting three for 18 yards and ending with the game-clinching interception. All three completions were short of the marker, and only one led to another first down, thanks to a 4th-and-1 run by Ben Tate.

Also note, though, that the Tigers' runs in the second half netted four yards, and running was generally untenable thanks to penalties, down-and-distance and the defense's complete (and justified) lack of respect for the quarterbacks.

You could think like that. Or you could ask a very legitimate question: Why buy the cow when you can have the milk for $3,000? After all, the secrets of Tony Franklin's spread are in a DVD sold by -- um, Tony Franklin. Three cheers for entrepreneurship. 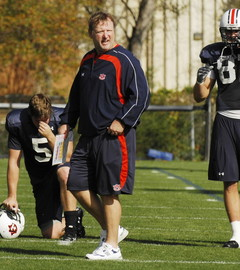 Okay, boys! Like you saw it on the DVD!

Or maybe that isn't the problem. Maybe the offense Auburn is running isn't the offense Franklin was selling. (HT: Joe Cribbs Car Wash)

Every coach I speak to says the same thing: I don't know what they are doing at Auburn, but it ain't the Airraid. So what's going on? I'm not an insider, but my best sense is that the other coaches on the staff (including Tuberville) never bought into the system - maybe because Franklin did a poor job selling it internally, or maybe he thought he didn't have to - and now their offense is simpl a muddle, a grab-bag of pseudo-spread garbage.

Apparently, the only big change will be Franklin running more of last year's offense. Come to think of it, Al Borges lives in Lee County and is still on the payroll. Why not order him to work first thing Tuesday morning? What could it hurt?

Whatever the problem is on the Plains -- and whatever the solution ends up being, if there is one -- it might be time to drop Tony Franklin as our favorite subject, because it might not be a case of his play-calling being bad.

Maybe his offense -- or whatever offense their running at Auburn -- is the real problem.

In another offensively-challenged game in Tennessee... Not too much more in this post, because of the focus on Tony, but I couldn't let this one go: As I watched a late-night replay of the NIU-Tennessee game the other night, I couldn't help but notice the play that cost the Huskies a shot at beating the Vols. And no, it wasn't this one.

It actually occurred in the third quarter. Now, keep in mind that NIU was a heavy, heavy underdog. Nothing to lose. But now, late in the game, they find themselves deep in Tennessee territory in a competitive match against a catatonic SEC team. They are down 13-3.

On first and goal from the Vols 9, QB DeMarcus Grady rushes for 1. After a sideline interference call(!) pushes the team back to the 18, Grady runs again, this time for 3. Then...

What? A play action pass? A trick play to go for the tie?

Nope. Grady runs again. Tennessee, unsurprisingly, stops the run well short of the end zone (we did pick up 7 yards!) and NIU settles for the field goal and the 13-9 score that would eventually go final.

Setting aside the sideline interference call, which is just inexcusable in this situation: Really? Three straight QB runs? Lou Holtz is back in college football, I suppose.

C'mon, Huskies. The entire SEC was counting on you to show the world how far Phil Fulmer had fallen, and you blew it.