Theorems and Stratagems of the Game, Week 9: How Not to Come from Behind

Share All sharing options for: Theorems and Stratagems of the Game, Week 9: How Not to Come from Behind

So you're coaching an unranked, 5-2 team in a conference game against a Top 10 (some say Top 5) squad. You're down by one touchdown with about three minutes left in the game. Your drive stalls at your own 36, fourth-and-9. You have one timeout.

Yes, if you're Mike Stoops, you punt. Now, this might not be such a bad decision if Arizona had been shutting down Southern Cal's offense en route to the 17-10 Trojan margin that would be the final score. But SC had put together two nine-play drives, a few other drives of moderate length and just a trio of three-and-outs in the second half. The chances of slowing down the Trojans enough to get the ball back with time to score the tying touchdown were almost nonexistent. And Mike Stoops punted. 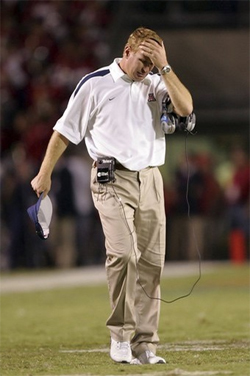 Of Southern Cal's seven offensive plays on the final drive, six were rushes, and Arizona could stop the clock only once. (The Trojans did get a bit of luck when Anthony McCoy picked up a Stafon Johnson fumble and carried it 23 yards for a first down.) The Wildcats tried valiantly to score on the ensuing SC punt, but the Trojans brought down Derick Barkum at the Southern Cal 34 after time had expired.

How about a blitz or two? There's nothing fans hate more than running the prevent offense once their team gets a healthy lead. If putting pressure on the quarterback has been working all game, why not keep doing it and really prevent your opponents from getting back in the game?

CU gave up 491 yards on defense and continually settled for three-man rushes and no blitzes to try and get pressure on [Missouri QB Chase] Daniel. Maybe the most frustrating part of the game was the soft coverage. Three-man rushes and an eight man ZONE. Not acceptable.

Dan Hawkins -- it's Division I football, brother. That kind of game plan won't work against Mizzou. Or any team that doesn't have Tony Franklin or Dave Clawson as offensive coordinator.