The Game of the Year After All: Georgia, Florida roll and other Week 9 Action

Share All sharing options for: The Game of the Year After All: Georgia, Florida roll and other Week 9 Action 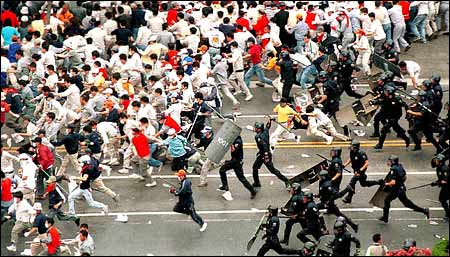 For weeks, we heard the build-up: Georgia vs. Florida might be the real SEC Championship Game. It might be a semifinal for the national championship game.

Then came Sept. 27, the day Florida fell to Ole Miss 31-30 and Georgia collapsed against Alabama, losing 41-30 in a game that was over by halftime. Suddenly, Georgia-Florida was losing its luster. Sure, it would still be a tough rivalry game, but Alabama looked geared to run away with the conference title and the Dawgs and the Gators were left chasing Vanderbilt for the lead in the SEC East. The BCS implications were fading fast.

Welcome back, The Game of the Year. With Georgia's 52-38 bludgeoning of LSU in Baton Rouge two weeks after Florida blasted the Bayou Bengals 51-21 in the Swamp, combined with the Gators' 63-5 dismantling of Kentucky on Saturday, all eyes turn again to Jacksonville.

The national implications are still sketchy, though either team that wins Saturday could easily move to No. 4 in the polls and be there, waiting, if two of the Big Three (Texas, Alabama and Penn State) stumble and Texas Tech gets eliminated. But the SEC East's title berth is on the line, and it appears that the winner will have a decent chance against Alabama.

For Georgia, which had looked unstoppable in the box score but not on the scoreboard the last couple of weeks, the LSU game was the opposite. The Dawgs were outgained 497-443, had just 16 first downs to LSU's 21. But three interceptions, especially a pick-six just 20 seconds after kickoff, will offset just about any yardage advantage you can come up with. And this game remained close, 21-17 Georgia, late in the second quarter and was 24-17 at halftime.

Then the big plays hit: On Georgia's second drive, a 49-yard TD pass from Matt Stafford to A.J. Green; on the Dawgs' next drive, a 68-yard TD run by Knowshon Moreno, and the game (38-17 then) was basically over. LSU would pull to within two scores, where the margin held.

Florida simply overwhelmed a banged-up and probably athletically inferior Wildcat team. The Gators outgained Kentucky 446-268, allowed UK a paltry 3.5 yards per pass attempt, and that was before the special teams meltdown; Florida blocked the Wildcats' first two punts and blocked a FG early in the second quarter. After the blocked FG: Rush by Chris Rainey for no gain, one-negative-yard pass to Jeffrey Demps, 61-yard pass to Jeffrey Demps, 35-0 Gators. Game over.

The buzz about this weekend's game? Just begun.

Don't let the 6-3 score in favor of Alabama at the end of the first quarter mislead you; this game was only close because the Tide moved its second-half troubles into the first half. The Vols scored the field goal only because of a boneheaded fumbled punt by Javier Arenas; Tennessee would not get a first down until the second quarter and gained just 173 yards all game, including an almost-laughable 36 yards rushing.

Despite some pressure early, John Parker Wilson turned in one of his typical solid-but-not-spectacular performances, going 17-for-24 for 188 yards; mix in the rushing performances of Roy Upchurch (14 rushes, 86 yards) and Glen Coffee (19 carries, 78 yards), and it's just another Alabama win. No need to change the recipe if it's working. 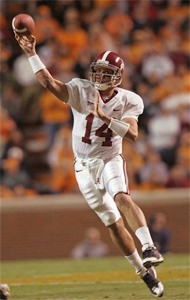 Only as good as he needs to be.

Tennessee, on the other hand, increasingly looks like it needs to throw out the recipe, the chef and the manager of the restaurant. The Clawfense has done nothing for the Vols, and the name is now a joke instead of the Next Great Thing. At 3-5, the Vols' chances to make a bowl are fading fast; even if they do, it will be in Shreveport, Memphis or Birmingham -- not locations Tennessee boosters are used to visiting in late December.

There would be no revenge for the Hogs' faithful, who you can only imagine wanted to prove that they knew better when they agitated for the end of the Houston Nutt Regime and found a would-be snake-oil salesman in Bobby Petrino. And Arkansas did slightly outgain the Rebels (386-369) and nearly pulled out the upset with a 14-10 fourth quarter.

But reality sets in: Arkansas' late-season resurgence is unlikely to carry them to a bowl game. It's hard to find three wins among vs. Tulsa, at South Carolina, at Mississippi State and vs. LSU. Ole Miss has vs. Auburn, vs. Louisiana-Monroe, at LSU and vs. Mississippi State left. So, good luck with your choice, Arkansas fans; for this year, at least, it worked out better for the Rebels.

No reason to linger too long on these forgettable scores in forgettable games; suffice it to say, Vanderbilt has proven definitively that it no longer belongs in the conversation as an upper-tier or maybe even mid-tier SEC team. The Commodores could still get in a bowl game, but it will be close: vs. Florida in two weeks is an almost-certain loss, a visit to Kentucky will be close, a home game against Tennessee might be the best hope and a game at Wake Forest is ... well, when the ACC is involved, who can tell?

You want to say that Vanderbilt fans should hope for a bowl berth as their best chance to keep Bobby Johnson from going to Clemson. But if he fails to get that postseason appearance after running up a 5-0 record, you have to wonder whether either Clemson or Vanderbilt will want him.

As for Mississippi State, who had already played themselves into SEC irrelevance, the contest against Middle Tennessee was more of the same. An 18-yard advantage (366-348), an impressive performance by Anthony Dixon and no one else, and a near-loss to a Sun Belt team, which would have made for two defeats at the hands of mid-majors this season. Someone needs to tell Sly you're not supposed to CROOM yourself.