Share All sharing options for: The End of Tuberville -- West Virginia 34, Auburn 17

It's time to stop dancing around it, time to stop saying it delicately, time to quit listening to the non-denial denials emanating from the Plains.

Tommy Tuberville will be fired as Auburn head coach by the end of the season, if not sooner. 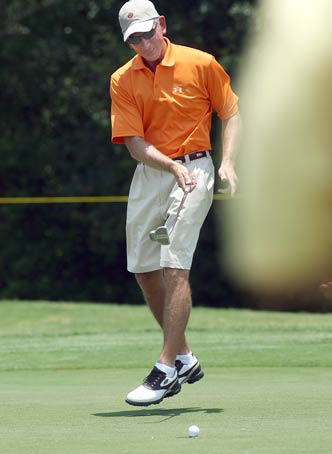 I don't say that as an advocacy statement or with any pleasure. When I was young, I grew up in Alabama and my first team was actually Auburn (much to the chagrin of my Tide-loving family) -- I became a Gamecock fan while attending South Carolina. For all the criticism of Tuberville, he's been a great coach, recruiting quality talent and leading the Tigers to successful year after successful year. Until this season.

Say what you want about the messy divorce from Tony Franklin and his awfulfense; there's no improvement when you gain just 260 yards against a defense giving up 320.8 to teams believed to be worse than Auburn. And there's no excuse for the second-half collapse of the Tigers' defense, once their strong point: wide-open receivers, massive running lanes, incomprehensible mistackles. A team that had flailed to a 4-4 start seemed to finally stop fighting.

From here, Auburn plays at Ole Miss, vs. Tennessee-Martin, vs. Georgia and at Alabama. Barring an upset, the Tigers can get to 6-6 with a win vs. Ole Miss and UTM -- but a loss against the Rebels could send Auburn to its first losing season since Tuberville's first year. This after being the clear favorite to win the SEC West.

Tuberville said earlier this week that he still had his health and his job. His hopes of holding on to the latter evaporated against West Virginia.